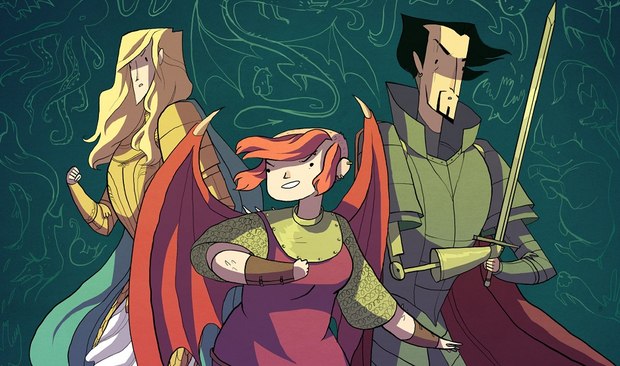 Nimona, the forthcoming adaptation of the Harvey and Eisner Award-nominated graphic novel by Noelle Stevenson, has landed a release date. The long-awaited feature, first announced in 2015, will be released by 20th Century Fox on February 14, 2020.

The news arrives courtesy of director Patrick Osborne, who posted the announcement on Twitter ahead of the long Independence Day holiday weekend:

Nimona is a fantasy comic set in a medieval future where knights go to night clubs riding hoverboards and carrying swords. The graphic novel follows a young shape-shifter who teams up with a disgraced knight in order to reclaim his honor and overthrow a corrupt regime. Published in 2012, Stevenson wrote and drew Nimona as her thesis project at the Maryland Institute College of Art.

The director of Disney’s 2014 Oscar-winning short film, Feast, Osborne was also the head of animation for Big Hero 6 and worked on several other Disney projects ranging from Wreck-It Ralph to Paperman. Osborne went on to direct the 2016 Academy Award-nominated short film and Virtual Reality experience Pearl for Google Spotlight Stories, as well as one season of Sony’s live-action/animation hybrid series Imaginary Mary, starring Jenna Elfman and an adorable CG-animated Mary, for ABC. Nimona will be Osborne’s feature film debut.

Nimona is written by former DreamWorks Animation executive Marc Haimes and produced by Roy Lee of Vertigo Entertainment alongside the company’s president of production Adam Stone. Haimes previously wrote the script for LAIKA’s 2016 stop-motion feature Kubo and the Two Strings. The animated adaptation is currently in production at Blue Sky Studios, the animation studio behind the Ice Age and Rio movies, as well as 2015’s The Peanuts Movie.

Stevenson is also one of the creators of the graphic novel “Lumberjanes,” which Fox is also developing as a live-action feature.