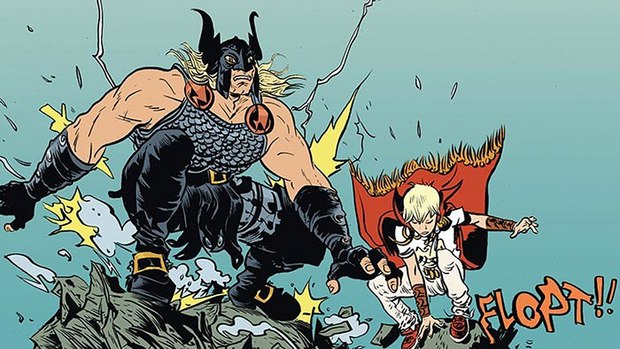 Patrick Osborne, the director of Walt Disney Animation Studio’s Oscar-winning short, Feast, has been signed to helm Battling Boy for Paramount Pictures, according to a report by TrackingBoard.com.

The action/adventure comic book adaptation, based on the hit graphic novel from Eisner award-winner Paul Pope, was reportedly picked up in 2008 by Brad Pitt’s Plan B Entertainment and brought to Paramount as a part of their first-look deal at the time.

David Gordon Green and Josh Parkinson co-wrote the latest iteration of the project, taking over for Watchmen screenwriter Alex Tse. Pitt will produce with Plan B’s Dede Gardner and Jeremy Kleiner, while Eben Davidson, Andrew Calof, and Peter Kang will oversee for Paramount.

Set in the world of Acropolis, which has become infested with a slew terrifying monsters and demons following the death of legendary hero/protector Haggard West, Battling Boy follows a thirteen-year-old demigod who must rid the land of the vile inhabitants as a part of his rite of passage. Battling Boy must deal with his arrogant superhero father, a city council that crafts an embellished image of him, uncontrollable powers from his variety of magical T-shirts, and the antics of Haggard’s vengeful daughter Aurora, all while attempting to survive a plethora of vicious monsters and save a corrupted city.

Just last month, Osborne signed on to adapt another hit comic, Nimona, for Fox, based upon the New York Times-bestselling graphic novel by Noelle Stevenson. Nimona will mark Osborne’s feature directorial debut and will be fully animated.