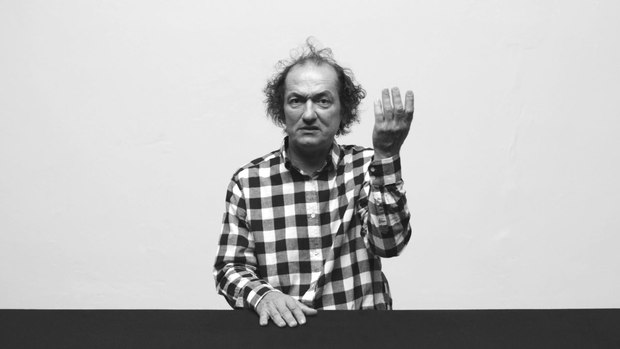 Thomas Renoldner’s Ottawa Animation Festival grand prize-winning Don’t Know What is now online – well, half of it. With a new Annie Award nomination under its belt, the festival circuit favorite is a unique and worthy watch; the short is a funny, entertaining mix of slapstick and avante-garde experimental animated filmmaking, a deftly produced exploration of single frame image and sound editing.

Sharon Katz, who interviewed the filmmaker at the festival in Ottawa last year, wrote:

“The initial strategy for Dont Know What was to video record Renoldner’s performance while he spoke 3 sentences: I don’t know, what I’m doing; I am just experimenting; I have no idea, what the result might be.  Each sentence created one part of the film and in addition to speaking the phrases, Renoldner also gestures. In fact, the beginning of the film feels quite serious even to the point that his body appears to be suffering.  As the film progresses, that seriousness is disrupted by a certain humour that comes from the frame-by-frame (or what Renoldner calls “micro-editing) editing of the frames.”

With regards to his film’s watchability, Renoldner told Katz, “I really enjoy experimenting. And I was also thinking a lot about average moviegoers when making the film. It was my intention to tailor the film in such a way that it can be ‘consumable’ for average moviegoers, but without losing the ‘language’ of experimental film. In that sense we could say, that Dont Know What is an attempt to open the eyes of these moviegoers to avant-garde cinema. The avant-garde film family should be happy about it.”