During a Comic-Con 2022 panel, the voice talent lineup was revealed on eOne’s upcoming original animated show; the 26-episode series is set to debut this fall. 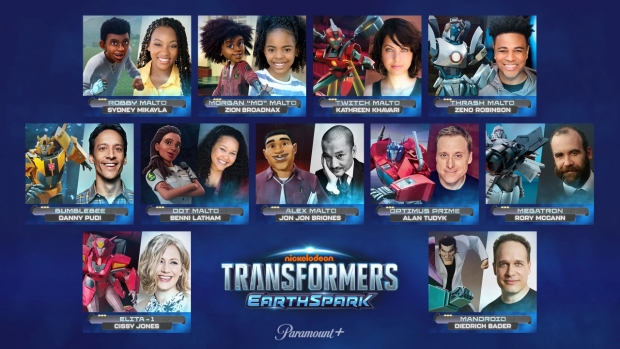 Last week at San Diego Comic-con, Nickelodeon, Paramount+, and Entertainment One (eOne) hosted a special panel that revealed the voice actors on the upcoming Paramount+ original animated series, Transformers: EarthSpark. Fans were also treated to a first look clip which you can watch below.

The all-new 3D CGI animated series (26 episodes) introduces a new generation of Transformers robots--the first Transformers robots to be born on Earth--and together with the human family who welcomes them in and cares for them, they'll redefine what it means to be a family.

In November, Transformers: EarthSpark debuts in the U.S. on Paramount+ and on select Nickelodeon channels internationally. The new series is the latest entry to the global Transformers franchise.

Check out the first look clip:

The new voice cast lineup is:

Hasbro, maker of the Transformers: EarthSpark toyline, and a production partner on the animated series, also participated in the panel presentation.

Transformers: EarthSpark is created, co-executive produced by Dale Malinowski (Rise of the Teenage Mutant Ninja Turtles) and executive produced by Ant Ward (Rise of the Teenage Mutant Ninja Turtles). The series is developed for television by Claudia Spinelli, Senior Vice President, Big Kids Animation, Nickelodeon. Production is overseen for Nickelodeon by Mikiel Houser, Executive in Charge of Production, and for eOne by Kari Rosenberg.