Paramount Releases First Look at ‘The SpongeBob Movie: Sponge Out of Water 3D’ 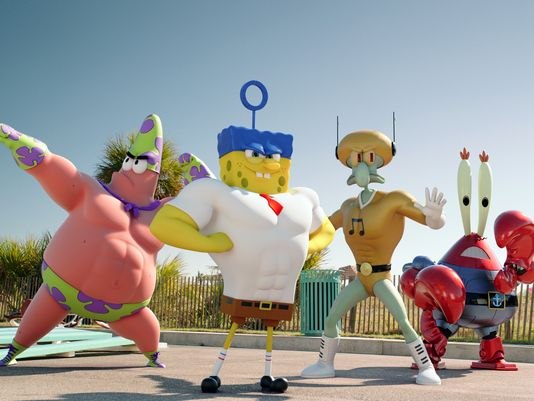 On the first full day of 2014 San Diego Comic-Con International, Paramount Pictures has released the first look at the upcoming SpongeBob SquarePants: Sponge Out of Water movie, courtesy of USA Today.

Due in cinemas February 13, 2015, the movie is the follow-up to the 2004 big-screen outing, The SpongeBob SquarePants Movie. In this first look, we get a peek at SpongeBob and company decked out in superhero costumes, complete with six-pack abs. In the Sponge Out Of Water movie, SpongeBob and his team start out in the animated world of Bikini Bottom, but they transform into CG superheroes to fight a menace that is endangering their world.

"It's a bold new world where no Sponge has gone before. I'm still getting used to it," says Tom Kenny, who has voiced SpongeBob for 17 years. "You've seen someone in a certain way for so long... It's just really different."

"It's the big climax of the movie," says director Paul Tibbit. "They all come to shore in our world. And they transform themselves into an Avengers-type team to do battle. Their world is in jeopardy."

Paramount is bringing the cast and crew of Sponge Out of Water to Comic-Con on Thursday for a Q&A and to show footage from the movie.