At Comic-Con 2022, the studio treated fans to a panel filled with big names and big reveals, including a new trailer and art from the upcoming feature inspired by the iconic role-playing game of the same name; the movie comes to theaters in 2023. 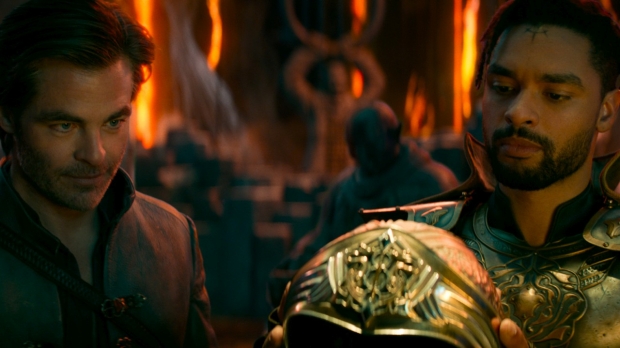 Fans returned en masse to Comic-Con 2022 in San Diego, once again able to relish the in-person experience of a one-of-a-kind event, the “con of cons!” Paramount Pictures rewarded fans, kicking off a celebration of its highly anticipated fantasy adventure flick, Dungeons & Dragons: Honor Among Thieves, based on the genre-defining role-playing game, with a new trailer, poster, and images. The reveals were presented at yesterday’s star-studded panel; the movie hits theaters on March 3, 2023.

In the film, a charming thief and a band of unlikely adventurers undertake an epic heist to retrieve a lost relic, but things go dangerously awry when they run afoul of the wrong people. Dungeons & Dragons: Honor Among Thieves brings the legendary role-playing game's rich world and playful spirit to the big screen in an action-packed comedic adventure.

Jonathan Goldstein and John Francis Daley will co-direct from a screenplay by Goldstein, Daley, and Michael Gilio. The movie is inspired by Hasbro’s “Dungeons & Dragons,” with a story by Chris McKay and Gilio. Jeremy Latcham p.g.a., Brian Goldner, and Nick Meyer are producing, with Denis L. Stewart, Goldstein, Daley, Pine, Zev Foreman, and Greg Mooradian serving as executive producers.  The film is from Paramount Pictures in association with eOne.