As described by Jon Peddie Research, the digital graphics market is dominated by CAD/CAM, with visual effects in games and movies accounting for only a small market share. 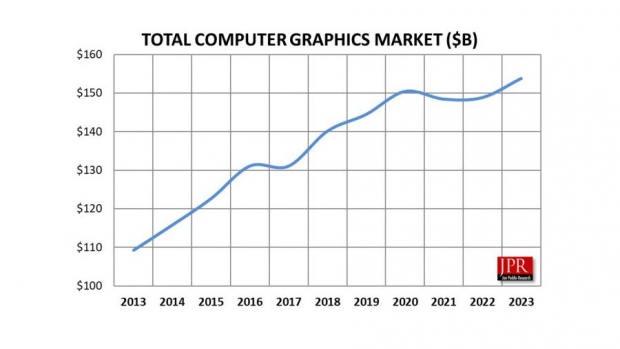 The computer graphics market, beginning in the early 1960s, has always been challenged by hardware speed and costs, although visionaries who saw potential and were driven by artistic and scientific quests, pushed technology in every direction seeking imagery and moving pictures that were indistinguishable from reality, as well as fantastic and imaginative.

CG is not a single discipline, but a collection of capabilities and people: processors, engineers, lots of memory, artists, displays (including XR), technical directors, programmers, and zillions of lines of code. And, as described in the most recent report from leading multimedia and graphics research and consulting firm, Jon Peddie Research, it universe has continuously grown, exponentially at times, often boosted by software breakthroughs. Growth in the dollar value of the market has leveled off a bit, but CG has seen consistent growth for over 60 years. Growth has slowed to an average (hardware and software) of 1.2% CAGR, to $154 billion a year.

The chart below shows the growth in hardware and software; software aspects of the market being slow to flat and hardware segments having varied, influenced by consumer products such as game consoles and PC gaming machines.

Virtual reality shows growth in content creation, such as virtual production. However, it remains a small part of the market. The real market for VR is in the design fields for professionals.

The computer graphics hardware market was worth $130 billion in 2018 and is expected to increase to $137 billion by 2023, with software growing slightly and a little less than hardware.

The hardware segment of the CG industry has seen steady overall growth, with some ups and downs due to product cycles and the irregularity of the PC market. 2019 saw the introduction of new GPUs and add-in boards (AIBs) with ray-tracing capabilities, and several new CPUs, and next-gen game consoles also were announced for 2H 2020.

The market for CG software in 2018 was worth $14 billion (not counting services and maintenance) and is expected to grow to $17 billion by 2023 as the industry shifts its sales model to cloud services and subscriber-based systems.

The digital graphics market is dominated by CAD/CAM with digital video a bigger market than the modeling or rendering segments. Although visual effects in games and movies make up only a small part of the overall CG market, it receives much of the media’s attention. However, the truly remarkable advances are happening in CAD as the digital and real get connected. CAD has taken a leap and is seen in increased revenues for all companies. CAD is used in the heavy lifting of 3D models of cities and spaceships with the ray-traced images of automobiles, skyscrapers, clothing, bottles, and other consumer goods is all CG.

The demand for programmers, artists, scientists, and designers continues to be strong as startups arrive in emerging and reborn markets such as augmented reality, virtual reality, and casual games. Artificial intelligence is playing bigger role in image processing, ray tracing, and AR. The arrival of new APIs, and platforms are also stimulating development. Firms are actively looking for people who can use and exploit these new programs and their associated hardware accelerators.

Given the trends in dropping costs, and the increasing users and usage of CG tools and hardware, it is predicted that the rate of growth for the CG industry will remain steady for the foreseeable future. Computer graphics is truly a worldwide industry.