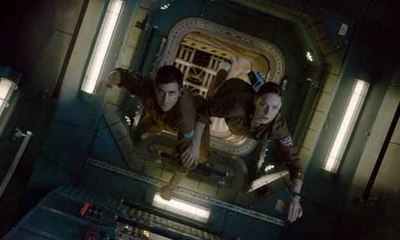 Working alongside colleagues at London-based studios, including Double Negative and ILM, as well as Life’s VFX supervisor John Moffatt, a team of 30 Outpost artists delivered all the shots in eight weeks.

The work was mainly made up of 3D set extensions, complex rig removal as well as a particularly interesting scene involving the creation of a 3D yoyo in space.

Outpost VFX supervisor Marcin Kolendo was particularly pleased with the creation of the photo-real CG yoyo performing in zero gravity conditions. “The yoyo needed to be physically accurate but also had to have a beautiful quality and feel to it,” he says. “We used a lot of reference material from the International Space Station to assess how things move in zero gravity, and we also met with U.K. yoyo champion Andy Jones so he could show us how a yoyo behaves.”

“Being involved in this project was an incredible step for Outpost VFX and proves that we can contribute to marquee Hollywood movies,” says Gez Hixson, head of production at Outpost VFX. “We crafted visual effects that were believable and beautiful in a relatively short space of time. It’s always a challenge when working alongside Double Negative and ILM, but Outpost truly stepped up to the plate and proved that you don’t need to be in Soho to create stunning VFX for feature films.”

Life was released in cinemas nationally on March 24.