Outpost 'Can't Refuse' to Deliver Key VFX on ‘The Offer’

Studio creates both CG people and environments to accurately portray NYC in the 1950s and 1970s for Paramount+’s 10-part series about the creation of Francis Ford Coppola’s 1972 classic, ‘The Godfather.’ 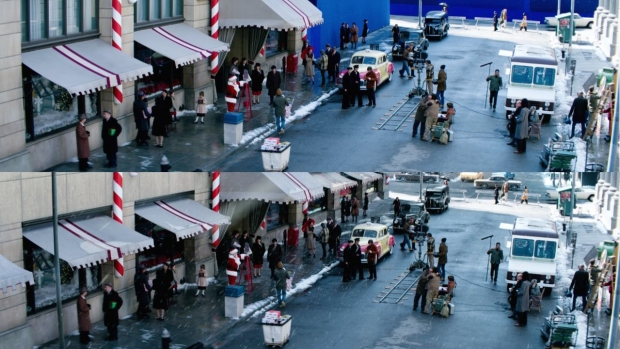 VFX studio Outpost was called upon to deliver key VFX sequences throughout the 10-part limited series The Offer, which featured the cast and crew on location in New York City and the sets of Hollywood in the 1970s. The series, which recently finished airing on Paramount+, explores producer Al Ruddy's experience creating the 1972 classic film The Godfather.

“It was fun to work on a prestige drama based on the making of an iconic movie,” said Matt Knight, Outpost VFX Producer on the show.

Knight and his team’s work can be seen in the opening shot of the series, where they recreated the look and feel of New York’s Fifth Avenue, Columbus Circle, and Mulberry Street.

He explains, “As the plates provided were shot in closed-off streets of New York or on film lots, the bulk of our work was de-modernizing the plate environments, adding period-accurate set extensions as well as building three key assets of New York, all to be set in the 1970s when The Godfather was filmed.”

Outpost VFX Supervisor Cale Pugh noted, “We did the opening scene of the first episode set around a festival that happens every year in Little Italy, which meant we had to recreate that portion of Mulberry Street. This included all the food carts, garlands, and we added a CG crowd in there as we were keen to get as much accuracy as possible. We sort of became obsessed with elements of the New York environment. For instance, with Mulberry Street, I was trying to find as many references as I could from the 1970s.” Later in the series, when portraying Francis Ford Coppola beginning the The Godfather shoot, the team had to ensure accuracy of two different time periods: the 1970s environment when the film was produced, and The Godfather sets dressed for the 1950s.

Pugh added, “We had to be careful when creating assets and buildings for this environment that we checked which time period they were in to keep matching the timeline and historical accuracy.”

The second episode proved one of the team’s biggest undertakings and challenges.

“Creating Columbus Circle in Episode 2 was probably our biggest asset, as we created a complex CG aerial view of New York City with Central Park in the background, as well as living elements like traffic networks intersecting around large CG crowds and buildings,” Knight shared. “The challenge on shots like this can come from creating those live elements and making sure they’re animated to flow together as one. With interesting sequences like Columbus Circle, our team at first laid out the environment to then do a whole secondary pass on laying out how people might live inside that environment and crowd behavior.”

The team returned to Columbus Circle for Episodes 7 and 8 during the rally of real-life New York City crime boss Joe Colombo (Giovanni Ribisi).

Knight continued, “Our team used the same method, but for the secondary pass, the focus was on how the CG crowds would disperse in a naturally fearful way after the shooting occurs.”

“All of us working on The Offer were conscious what we were doing and what it meant to the fans of the movie, and us all working on it as film fans as well,” concluded Pugh.