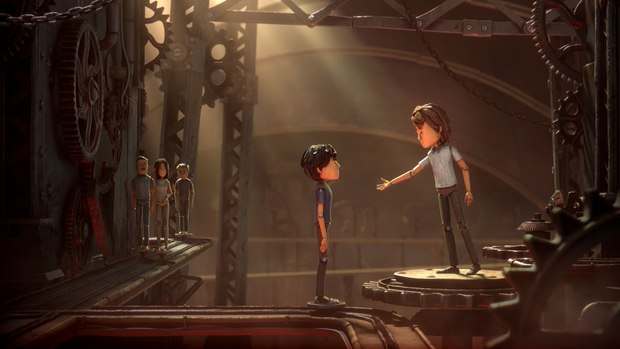 Oscar-winning director Laurent Witz recently completed a new animated short film in collaboration with agency M&C Saatchi Sydney for Australian non-profit organization AIME, which uses mentoring to make the education system fairer and more inclusive for all, empowering kids to change the course of their lives.

The CG-animated short, entitled Cogs, produced by Luxembourg-based Zeilt Productions, was created to help launch the #10GoldenTickets initiative aimed at bringing the AIME model of mentoring to a global level. It tells the story of a world built on a mechanized system that favors only some, following two characters whose lives seem predetermined by this system and the circumstances they were born into.

Cogs took a team of 30 artists five months to complete from pre-production through the final edit. The director of the 2014 Academy Award-winning animated short Mr. Hublot, Witz wanted the characters “to be poetic, not realistic,” according to animation director Mickael Coëdel, “and from there came the idea to make them the small, toy-like wooden characters they are,” he says.

“[Laurent] really appreciates creating emotions and poetry in mechanical worlds,” Coëdel adds. “He thought that working with wooden characters could bring warmth to this mechanical world that’s driven by a hellish underground machine representing our system. Having wooden characters also helped the audience take a step back from the message and make it more universal.”

Once the character designs were finalized, a team of 3D artists brought them to life using Autodesk Maya and Pixologic Zbrush. “The biggest difficulties were getting a nice effect on the wooden hair, or in the small notches in the wooden bodies,” Coëdel recounts.

Meanwhile, a team of artists worked on illustrations to develop the overall look of the film, creating distinct color palettes, architecture and engineering to distinguish between the richer and poorer sections of the town. Each scene was first created in 2D before it was completed in 3D, including complex digital matte paintings created using Adobe Photoshop for some of the backgrounds and more intricate buildings. Zeilt artists employed Photoshop and Allegorithmic Substance for texturing, Maya for rigging and animation, and Foundry Nuke for compositing, with the final results rendered out using a combination of Maya and Chaos Group’s V-Ray.

“Laurent wanted the audience to understand the concept from the first scene,” Coëdel says. “That’s why the camera starts from the mechanical underground, pans up to immediately show people moving on tracks and then reveals a very round hill -- symbolizing our planet -- that’s divided in two, the more privileged half and the disadvantaged one.”