Legendary animator, illustrator, producer, and author, who won an Academy Award in 1961 for his animated short, ‘Munro,’ passed away last Thursday at his home in Prague. 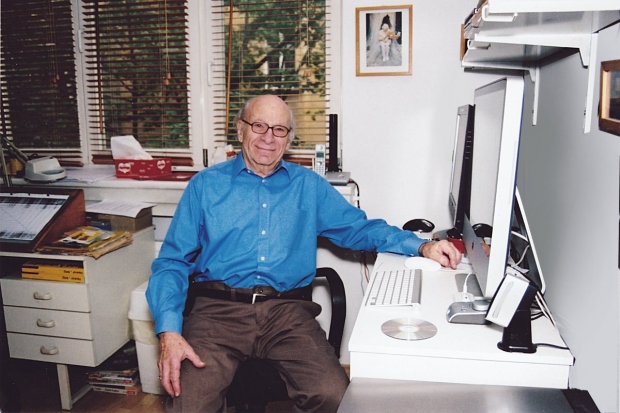 It is with great sadness that AWN reports the passing of Gene Deitch, the legendary director, producer, animator, cartoonist, and author. He was 95. He is survived by his wife and producing partner, Zdenka, and three children from his first marriage.

It sounds archaic to refer to Gene as “prolific,” but he was truly a man of many extraordinary talents, from illustrating to cartooning, animating to directing animation. He won an Oscar in 1961 for his animated short, Munro, about a 4-year-old boy accidentally drafted into the US Army; he had four other Oscar nominations, including two in the same year, 1964, for Here’s Nudnik and How to Avoid Friendship. His numerous other honors included a 2004 ASIFA Hollywood Winsor McCay Award for a lifetime of achievement in animation.

He created many memorable cartoon characters, including Tom Terrific, adapted from his comic strip, and first shown on the Captain Kangaroo TV show; Mighty Manfred; Sydney the Elephant; and Nudnik, among others. He has 112 directing credits on his IMDB record, which I suspect is incomplete. He directed 13 episodes of Tom and Jerry, 28 of Popeye the Sailor, and 34 of Krazy Kat. Between 1969 and 2008, he adapted and directed 37 animated films for Weston Woods.

A career spanning more than 70 years saw him spend short stints at a number of notable studios before moving to what was then communist-ruled Czechoslovakia in 1960, where he had fallen in love with Zdenka; an original 10-day trip for a project with producer William Snyder became a 60-year love affair with his future wife, as once in Prague, he never left. He literally left behind his life in New York, eventually marrying Zdenka in 1964, producing animation together for almost half a century. His 1997 book, “For the Love of Prague,” was an intimate, fascinating look at life under Communism, and how he and Zdenka, at the height of the Cold War, ran a studio producing animated TV series like Tom and Jerry and Popeye the Sailor. He joked with me once how names had to be changed in credits, such as Pavel to Paul, so no one in the U.S. would realize where the work was being produced.

Adam Snyder, William’s son and an animation producer and distributor himself, looked back on his father’s not-always-rosy relationship with the director; read his insightful book review and commentary on Gene’s move to Prague and subsequent years spent working with the producer.

Gene started in animation at the original Hollywood UPA studio in 1946, before moving on to the Detroit Jam Handy Organization in 1949. He was creative chief at UPA-New York from 1951-1954, and a director at John Hubley’s Storyboard Inc. in New York in 1955, before moving to CBS-Terrytoons in 1956. After getting fired from Terrytoons, he started his own studio, Gene Deitch Associates, in 1958, where Munro was produced. His own studio lasted a mere two years; in late 1959, he visited Prague on a potential project with Snyder, eventually working together at Snyder’s Rembrandt Films from 1960-1968. With Zdenka, he directed numerous projects as part of the Prague animation studio, Bratri v Triku. Though he “retired” in 2008, he continued to write and dabble in projects up until his death.

A jazz aficionado, in the early 1950s he drew dozens of humorous “the Cat” cartoons, as well as issue covers, for the jazz magazine, “The Record Changer”; “The Cat on a Hot Thin Groove,” published in 2003, is a glorious anthology of his work at the magazine.

His relationship with AWN ran deep; he wrote several articles for the site, talking about his concern about for the growing use of motion capture technology, and his considerable problems with Disney’s Frozen.

But, in one of AWN’s proudest and most enjoyable efforts, together with Gene, we edited and published online his masterpiece memoir / guide to a career in animation, “How to Succeed in Animation: Don’t Let a Little Thing Like Failure Stop You.” I encourage anyone interested in animation to take a look; the book is a must-read, a warts-and-all take on Gene’s career, his successes and failures, filled with practical advice and insightful information on a wide variety of topics such as the reality of “deals,” profits, contracts, working with producers, creative freedom and his love for an art form and entertainment medium he dedicated his life to mastering. The chapters breaking down his greatest creative loss, an aborted “Charlotte’s Web” project with E.B. White, are particularly revealing; he includes copies of numerous letters going back and forth with the famed author that show, in great detail, the promise, and ultimate collapse, of the project.

It is impossible to effectively summarize his body of work and career achievements; as much has been left out here than included, unfortunately. It is even more difficult to share how funny, engaging, and thoughtful he was. Once, when discussing the derivation of my family name, Sarto, as having been shortened from Savitsky in 1913, he shared that he had no idea what his original family name was; Deitch came from a clerk asking family members arriving in the U.S., "sprechen zee Deutch?" to which they meekly nodded. Working together for months on his book was a joy; his stories were many, always fascinating and humble, never boastful. His nose for detail was inspiring.

Having been mentored himself by industry giants going back to his UPA days, Gene was determined to share as much of himself as possible. We exchanged emails quite frequently, discussing any number of issues he felt strongly about. Never one to mince words, he never-the-less was not dismissive of contrary ideas. He took great pride, and enjoyment, in putting his last book online at AWN, free of charge for everyone to read; the idea that young animators could glean something that might lesson their struggles, that he could encourage them to keep pushing, to “make their own luck,” meant everything to him. A life-long student of animation, he felt a duty to pass as much of his experience, knowledge, and most importantly, joy, to others. He was kinds, generous, and genuine. I always considered him indefatigable, with a strength of character that fully matched his amazing and vibrant longevity.

In “How to Succeed,” reflecting on a career spent continually learning, as much as doing, he wrote:

“In our art/craft of animation, in order to truly win our audiences hearts, we should aim not just to make our characters move, but to make them live – or seem to live – to project an inner life that motivates their actions, and make those actions plausible.  I wish I could say that I ever truly accomplished that… but I was a UPA man at heart. I have always valued strong stories and humanity, but in animation, I had other goals, guided by graphics, symbols, and stylization.  That has its place, and my successes nicely balanced my failures… but I have grown in my understanding of what animation is all about. Our audience is made up of humans, and we must respond to human expectations.”