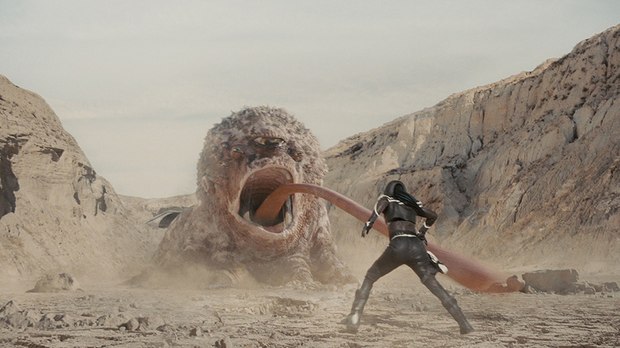 “This was an incredible opportunity for Dee to write and direct a branded film,” says Anonymous Content Managing Director and Partner Eric Stern. “Walmart was a terrific creative partner who wholeheartedly embraced and supported her vision from start to finish.”

The production is led by women, including Mudbound Oscar-nominated cinematographer Rachel Morrison as director of photography, costume design by Colleen Atwood (Chicago and Memoirs of a Geisha), and production design by Hannah Beachler (Moonlight and Black Panther).

“We all know Dee is a fearless creative force, but with ‘The Box,’ she also brought an unexpected playful, otherworldly vision,” adds Executive Producer Lori Stonebraker. “We couldn’t be happier with the beautiful, inspiring story she chose to tell."

MPC worked closely with Anonymous Content’s Dee Rees to realize her vision of creating an epic sci-fi world. “It was great working with Dee and we all had absolute trust in her concept,” says Vadim Turchin, VFX Supervisor at MPC. “We had an amazing opportunity to use our talents to create a whole new world and a new character -- the monster -- turning it into something emotional and action-packed.”

Grae Revell, Lead Animator at MPC, added: “Being able to create creatures like the giant alien monster with tentacles is why we work in VFX; it allows us to channel our inner child. Creating new worlds entirely from scratch also enabled us to be really creative, giving life to new environments such as outer space and inside the hive.”