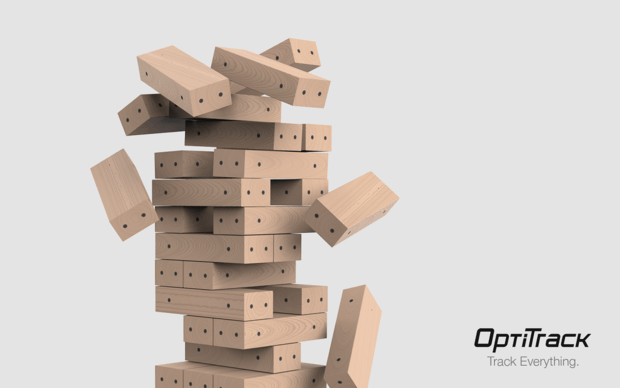 CORVALLIS, OR -- At GDC 2019, OptiTrack, the world’s largest provider of location-based VR (LBVR) wide-area tracking systems, will show off the latest in six degrees of freedom (6DoF) tracking with its Signature Pulse Active tracking technology. The real-time demo will showcase OptiTrack’s ability to “Track Everything,” with industry leading low latency and precision.

“We wanted to highlight some of the things that make OptiTrack technology so popular with the world’s location-based VR professionals, so we developed a live show that demonstrates that our systems track everything, which allows LBVR experience designers to fully express their creativity, without worrying about technical limits,” said OptiTrack CSO Brian Nilles. “So we built an LBVR set that will track everything within it, including two sets of Jenga blocks, which people can play live -- and in VR, and we embedded our Active tracking tech in everything else in the experience in order to open people’s imaginations to the possibilities.” In addition to the Jenga demo, which highlights the precise position and orientation data delivered under heavy occlusion, OptiTrack will also be showing the new VIVE Pro HMD clip and its plug-and-play integration, as well as a sneak peek of the prototype Manus VR/OptiTrack hybrid glove for robust finger tracking, and the OptiTrack integrated Striker VR haptic feedback gameplay weapons.

Stop by the OptiTrack booth during GDC (South Hall #651) expo hours to experience the demos, or for more information, visit: optitrack.com/motion-capture-virtual-reality.