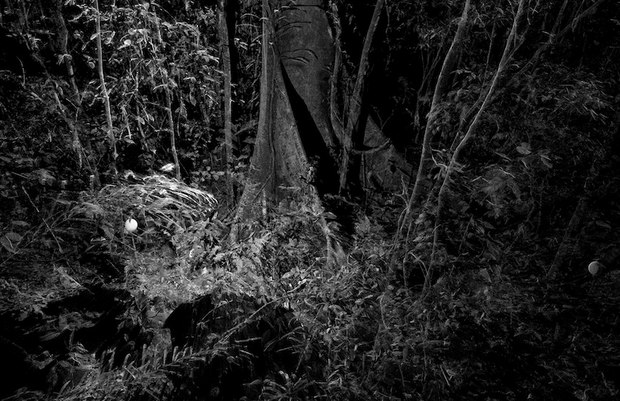 Corvallis, OR -- OptiTrack motion capture technology is being used by artist Daniel Steegmann Mangrané in collaboration with ScanLAB Projects to fully immerse viewers into Phantom, one of the first virtual reality installations utilizing Oculus Devkit2 to be presented at an art museum in New York City. The New Museum's 2015 Triennial exhibition, titled "Surround Audience," features work from early-career artists around the world, and "explores the impact of an increasingly connected world on personal identity and the role and evolution of art." Mangrané's installation combines OptiTrack motion capture technology and Oculus Rift virtual reality (VR) headsets to transport museum-goers to the rapidly disappearing rainforest in Brazil.

Mangrané worked with ScanLAB Projects to produce detailed 3D scans of the Mata Atlântica rainforest, which visitors can explore in startling detail as OptiTrack tracked their movement throughout the exhibition space. By supplementing the Oculus Rift with motion capture, the installation can be extended well beyond its native capacities, offering a far more immersive viewing.

“Even more important than the visual aspect of this installation is the physical aspect, so incorporating movement and physical cues was a priority for me,” explained Mangrané. “The physical 3D tracking provided by OptiTrack allows visitors to move through branches, crouch down and feel the rainforest floor, and really feel as though they are present in and interacting with this wondrous world. Motion capture enabled the most realistic rendering possible, based on the body’s movements in relation to environmental data from the rainforest scans.”

“We chose OptiTrack because the Prime 13W’s performance and discreet form make it perfect for maximizing compact VR setups while creating a seamless experience; users were almost totally unaware of the technologies active behind the scenes,” said William Trossell, co-founder, ScanLAB Projects. “OptiTrack continued to perform flawlessly once we explored implementation. Their simple and open developer tools hugely cut down on development and integration time, which enabled ScanLAB Projects to quickly prototype ideas and focus on creating a captivating experience rather than invest time resolving technical hurdles.”

“Often virtual reality strives to deliver presence through overpowering visuals; in its eerie stillness, Phantom demonstrates the immersion that can be created by instead elevating VR with highly responsive, 1:1 motion tracking,” commented Seth Steiling, Marketing Director, OptiTrack. “As a result, their work remains incredibly engrossing, while the technology that enables it recedes into the user’s periphery.”