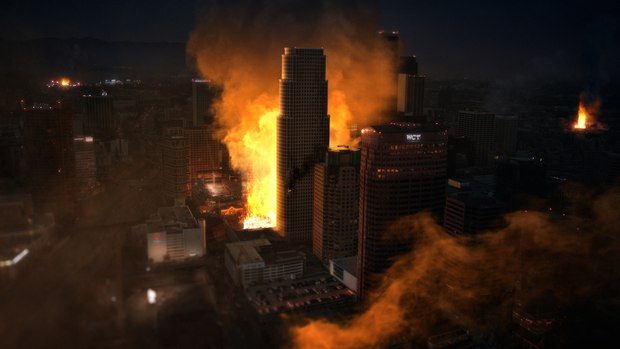 NEW YORK, NY -- Creative studio One Fine Day (OFD) recently produced the trailer for Fear the Walking Dead a spin-off of AMC's hit series The Walking Dead. The 30 second film went viral, kicking off what became the No.1 rated cable series launch of all time.

From concept to production to post, OFD worked closely with AMC to create the VFX-intensive promo, which reveals Los Angeles as the latest city to fall victim to the zombie apocalypse.

“This new series begins pre-apocalypse, so the totally abandoned and desolate look and feel of the original The Walking Dead franchise didn’t apply here,” explains One Fine Day Co-Founder and Creative Director Christopher Haak. “Instead, the network wanted to convey the gradual buildup of fear and tension; people are still going about their daily routines, but something ominous is brewing.”

OFD combined live-action footage and 3D animation, as well as digital matte paintings and compositing to create the spot. Offering a distant but detailed glimpse of Los Angeles plunging into chaos, the camera moves through the beleaguered city, whose power grid is waning into darkness. With a bird's-eye view of the destruction, illuminated by hellish blazes, the trailer concludes with a dawn shot, where the dead city is revealed with towering columns of black smoke.

The permeating element of fire in the trailer was not only a narrative trope, but also a practical light source, illuminating sections of the blacked-out city and helping to maintain a sense of the depth and volume in an otherwise dark environment.

“Between the prismatic city lights and streaming traffic, L.A.’s nighttime skyline has an incredible energy that’s pulsing with life,” says Haak, who referenced actual photos of natural disasters and urban power outages to create each scene. “We imagined what it would look like if we sucked the life out of the city, one building or one block at a time.”

Knowing that a sprawling city of four million would not just implode all at once, OFD was challenged with compressing insidious destruction down to just 30 seconds. They achieved this with a time-lapse effect, inspired by the work of DP Colin Rich, who also provided plates for the concept. The frenetic motion of the time-lapses subtly reinforces a sense of panic and hysteria.

Keeping the focus on the grittier “everyman” locations where Fear the Walking Dead is set, OFD and Rich scouted industrial and suburban locations that looked quintessentially L.A.

With broad, sweeping shots of the sprawling city dominating the picture, OFD made a conscious effort to maintain a human-scaled point of view, as if the viewer were a bystander trapped in the city. For most shots, this meant ground-level camera angles where rich foreground details were visible. Even as the camera climbs upward in later shots, the viewpoint remains at a scale from that of a tall building, or hills just outside the city.

“From compositional choices to understanding and mimicking the behavior of light, we try to approach every shot as both artists and scientists,” says Haak.

“Great visual artists are keen observers, able to pick out details that make a scene beautiful, and that inject their images with a sense of humanity,” concludes One Fine Day Creative Director and Co-Founder Nathalie de La Gorce. “AMC gave us the creative freedom to explore and find those cinematic details, while simultaneously helping us to simplify and distill the concept; keeping the action focused on moving the story forward. Ultimately, this allowed us to tell a fairly complex story in a concise, compelling and effective way.”