Award-winning animated series produced by Singapore’s One Animation named one of CiTV’s top five shows of 2016. 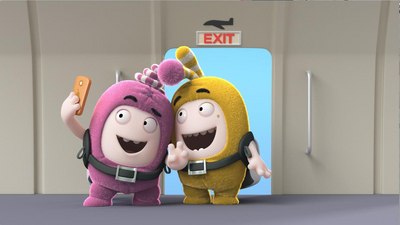 SINGAPORE – One Animation’s Oddbods are a big hit in the UK, placing as one of the CiTV’s top five shows of 2016 so far. The series has been viewed over 6 million times. Data for 2015 also places Oddbods as one of the highest rated kid’s TV shows of 2015 in the UK, even though it didn’t make its debut there until last autumn.

“Every so often animated characters come along whom everyone just seems to fall in love with,” comments Trudi Hayward, SVP Head of Global Merchandise at ITVS, “In the past this has been iconic characters such as Tom and Jerry, or in more recent times the highly successful Minions. Characters and shows like these have a universal appeal because of their conceptual simplicity combined with good old-fashioned fun.”

“Oddbods, which celebrates all the ‘oddness’ in everyday life, is certainly one of these types of show, not least because of the fantastic quality of storytelling and cinema-quality production. But also because the slap-stick, dialogue free concept works so brilliantly for the multi-screen generation,” continued Hayward. “The team here fell in love with it when we first saw it, and we knew that kids, who love and relate very easily to quirky and slightly bonkers characters anyway, would love it too.  It is gratifying that the latest ratings data has proven us absolutely right.” The fun-filled show is currently airing across the globe in its 46 x 5 and 224 x 1 minute formats.  A longform 60 x 7 minutes format will premiere in the UK in early summer. It is also available on social media platforms, including Youtube where it has clocked up over 65million views to date.

“Oddbods is a special show to the team at One Animation team. It makes us laugh as much as the audience it is created for, not least because each Oddbod is a celebration of the crazy little personality traits evident in everyone, whatever age they are, or culture or society they come from. The commitment and verve which the production team bring to the show shines through, they’ve created something really quite special,” commented Sashim Parmanand, CEO of One Animation, the studio behind the Oddbods production. Over the course of winter 2015/16 One Animation made a series of announcements relating to partnerships and deals it has signed to expand the Oddbods brand into a range of licensed merchandise from plush toys and playsets, to apparel and gifting.

“We’re focused now on maximizing the impact the show can make across a range of platforms and are looking forward to making some further announcements relating to this shortly,” concluded Sashim.

Oddbods is an animated TV comedy sketch-show following the antics of seven adorably odd characters from the sleepy ‘Zee’ to the angry ‘Fuse’. Viewers are invited into a world of laugh-out-loud mishaps and slap stick situations as the Oddbods go about their daily lives in Oddsville.