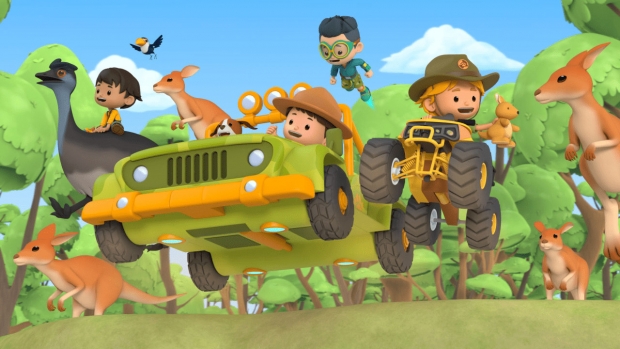 The initial roll out via VlogBox will provide free, ad-supported and SVOD apps for Leo the Wildlife Ranger and Counting with Paula, set to launch globally with Roku, Android TV and Amazon Fire TV. The apps will include 11’ episodes and curated content as well as bonus content from each series such as “best of” Leo and an additional 20 x 2.5’ of nursery rhymes for the Counting with Paula app.

Harry Teper, Managing Director, Omens Studios London, said, “Leo the Wildlife Ranger and Counting with Paula have garnered a loyal global fanbase and this exciting partnership with VlogBox will offer international audiences a new avenue to access our content. As our first apps launch in the AVOD and SVOD space, VlogBox is the ideal collaborator for Omens, with its team’s unparalleled experience, and we look forward to developing additional offerings with them for families around the world.”

“Omens Studios is a bottomless source of creativity and inspiration for our team, and we’re happy the company has joined our mediahouse. We believe that with access to the majority of US households, Omens Studios will increase their audience and grow more fans thanks to the engaging content,” adds Nick Platonenko, CEO at VlogBox. Leo the Wildlife Ranger’s first season has sold in over 50 countries globally; Season 2 won Best Preschool Program at the Asian Academy Creative Awards 2021 and was awarded the silver winner for Series – Television at the 2021 Telly Awards. The series aims to encourage knowledge and appreciation of wildlife and nature and to develop eco-awareness in young children. Aimed at 3–6-year-olds, the show features Junior Rangers Leo and Katie and their loyal canine companion Hero, on their quest to learn more about the beautiful animals and plants that surround us on this planet.

Counting with Paula, aimed at children aged 3-6, is currently available in over 50 territories and follows six-year-old Paula and her friends making learning about numeracy, literacy, and social development skills fun, easy, and entertaining. The series features Paula along with friends - Tim, Billy, Chalkie, Calc, and the Numbers as they go on exciting adventures to colorful and exotic places, where they solve problems and make new friends.