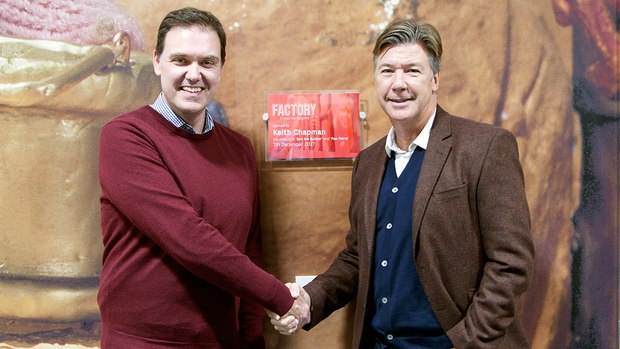 Launching Factory Creative Engine is a further step toward the company’s goal of creating more of its own self-initiated intellectual property, and enhancing its full-service capability.

Factory has converted its RED Studio to become a centralized creation hub for creatures, critters and inspirational new worlds. This new facility will support all Factory’s current slate of productions and provide state of the art character creation services to its clients.

The dedicated studio means the creation of 40 or more jobs in the Manchester area, adding to a progressive entertainment landscape in the area, rich in animation opportunities.

“I’m delighted to be given the opportunity to be at the helm of Factory Creative Engine, which is a real leap forward for the studio; being so heavily involved in the design and build process, guiding the technical requirements and level of staffing required has been wonderful,” says Jon Kershaw, Creative Engine manager. “It’s rare to get this level of input into the creation of a new studio, and it is so satisfying to watch it all come together after so many months of hard work. I look forward to moving ahead with Factory Creative Engine, getting stuck into creating characters and worlds for the shows, and playing an active role in furthering Factory’s business plan.”

“We’re thrilled to be making such great headway with our ongoing ambition to create more of our own IP, which with Creative Engine, we can now offer a greatly enhanced, end to end creative service,” says Phil Chalk, MD of Factory. “The technology we use is at the very forefront, and combined with the traditional artisan production techniques, we have all bases covered for any show we work on, allowing us full creative freedom.”

The recent launch of the Factory Rights arm, saw the studio acquire Clive Juster’s rights company Rollo Rights, which includes Mr. Benn and King Rollo, amongst many other cherished children’s TV programs. The first original output from the acquisition was Off the Leash, a YouTube series created by Factory and cartoonist Rupert Fawcett, hilarious animated shorts of the classic cartoons. The channel has had more than 1 million views since it launched in the summer.

Factory has produced a huge range of shows, using varying animation styles including 2D, 3D CGI, Stop Motion and Live Action. They have won multiple awards and nominations including BAFTAs, Kidscreen, International Emmy and Broadcast Awards for their creative output and animation work. The impressive roster of shows that they have made includes the beloved children’s classic Clangers, Newzoids, Scream Street, Becca’s Bunch and Strange Hill High.