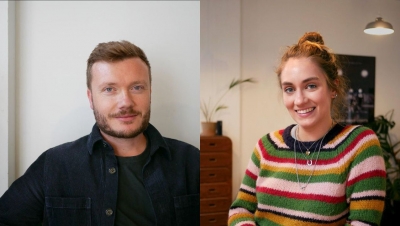 London-based Okay Studio has expanded its team with the addition of Josh Sanders as executive producer and Carla Thomas as producer. The two join the expanding roster at the post-production company specializing in offline editing, color grading, motion retouch, and finish.

Sanders most recent tenure was at Droga 5 serving as senior producer for four and half years. Prior to that he worked with agencies including Saatchi & Saatchi, Publicis, and The & Partnership as well as production companies MJZ and Stink. He has worked on several award-winning campaigns alongside directors Andreas Nilsson and Jeff Low, as well as comedy duo Tim Heidecker and Eric Wareheim.

Thomas brings an extensive knowledge of post disciplines having previously worked at MPC, Cheat and Nomad.

“Our production team is going from strength to strength, and the addition of people as ambitious and of such a caliber as Carla and Josh is a testament to that,” commented Okay Studio co-founder Nikolaj Belzer. “Josh’s years of experience delivering the best and biggest campaigns out there brings a true client perspective in-house. He has seen most fellow post places from the inside and knows what ultimately does and does not work best for directors, production companies, and agencies alike. With that in mind, Josh is all about making sure we can deliver something truly special on every job. He is a true team player - the perfect fit for our young team where the strength does not lie in numbers but in talent.”

Adds Nikolaj, “2021 was an incredible year with us significantly growing our team and client list. 2022 is all about adding some exclamation marks with key creative hires and doubling down on all the amazing work the team has put out last year. Having collaborated with Josh for some time now, I can’t imagine a better leader to make that happen."

“Nikolaj and Madeline [Chapman] have built a solid foundation in terms of Okay Studio’s client base and talent - the office is brimming with curiosity and positivity,” remarked Sanders. “I hope my influence will help us to showcase our capabilities on a bigger, broader scale. Being able to service clients from offline to finish offers much more fluidity in terms of process and creative oversight, often reducing the risk of plot twists along the way. We have a real cross-section of people entering the studio. Naturally, this brings with it an energy that permeates into our working lives, and in turn, our output. With additional hires on the horizon, I’m excited to see where this journey takes us.’’