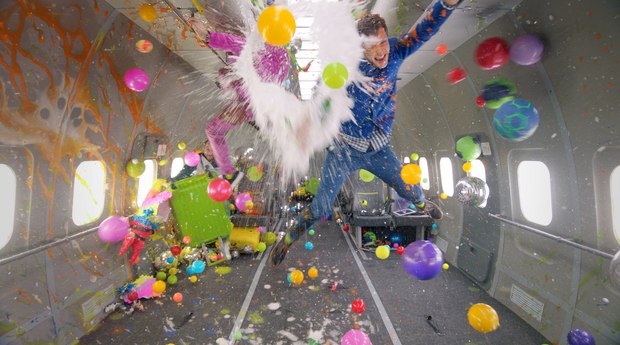 LOS ANGELES -- Post production company Therapy Studios helped OK Go celebrate its 10th year of making pioneering music videos with the release of the band’s most ambitious clip yet. OK Go singer/filmmaker Damian Kulash, Jr. and frequent collaborator filmmaker Trish Sie directed the video for the infectious track Upside Down & Inside Out. The clip was shot in zero gravity in the skies above Russia, with S7 Airlines signing on to support the band’s dream to make a weightless video. Together, they proceeded with a lyric from the song as their motto, “Gravity is just a habit.”

Upside Down & Inside Out, which features the band and S7 air hostesses Tatyana Martynova and Anastasia Burdina, who are trained aerialist acrobats, was shot in an airplane that flies parabolic maneuvers to provide brief periods of weightlessness.

After months of planning, OK Go headed to the Yuri Gagarin Cosmonaut Training Center for ROSCOSMOS (the Russian equivalent of NASA), where they spent three weeks playing, testing, and filming. In total, they flew 21 flights, with 15 zero gravity parabolas per flight, for a total of about two hours and 15 minutes in weightlessness. ROSCOSMOS provided the Il-76 MDK plane and cosmonaut training staff.

The longest period of weightlessness it’s possible to achieve in these circumstances is 27 seconds, and after each period of weightlessness, it takes about five minutes for the plane to recover and prepare for the next round. The total gravity change meant a musical number for the history books, resulting in a film of mind-bending, perspective-warping action that unfolds in a colorful frenzy.

“Because we wanted the video to be a single, uninterrupted routine, we shot continuously over the course of eight consecutive weightless periods, which took about 45 minutes, total,” explained Sie. “We paused the action, and the music, during the non-weightless periods, and then cut out these sections and smoothed over each transition with a morph.”

Therapy Studios was enlisted early on to help Sie and Kulash figure out how to best capture the material. Editor Meg Ramsey cut the test footage together to see how close the band had to hit their marks in order to make the edit with the final product. Then the band and crew returned to Russia to shoot the real thing.

It was decided that the footage would be sped up by 28.47% to help solve two challenges. First, the song moves in musical sections that are approximately 21 seconds long, so in order to have the routine emphasize the song, rather than fight it, the periods of weightlessness should be 21 seconds also. To fit the 27-second periods weightlessness into 21-second sections of music, the band performed the routine slightly slower, and later sped up the footage (28.47%) to bring it back up to normal speed. Second, zero gravity makes everything look like it’s in slow motion, so speeding up the footage a little helped to plan the routine sharper.

The band mastered the challenge, floating around the interior of the plane and handling the props with spot-on precision. This allowed Meg Ramsey to cut or speed through all the reset periods to create one full take where the routine is continuous, culminating in a gloriously messy climax of music and paint-splattered pandemonium.

Wren Waters, Lead Flame Artist/Partner, and his team at Therapy Studios split the finishing and morphing duties with Ryan McNeely, Creative Director/Partner at Design & VFX company Visual Creatures and his team. Together they completed eight morphs in total, tying the shots together and refining each transition to make it as seamless as possible. Finally, the footage was handed off to Therapy colorist Bob Curreri, who enhanced the Technicolor acrobatics that unfold onscreen.

This is the fourth OK Go video that Sie directed with her brother, Kulash, including the Grammy-winning clip Here It Goes Again. She also directed and starred in the band’s video for Skyscrapers.  Her films include the 3D feature Step Up All In (Lionsgate/Summit 2014) and numerous award-winning shorts. Her latest, The Big Breakup, an exploration of America's dysfunctional love affair with guns, will be released in March 2016.

Upside Down & Inside Out is a track from OK Go’s latest album, (Paracadute/BMG).