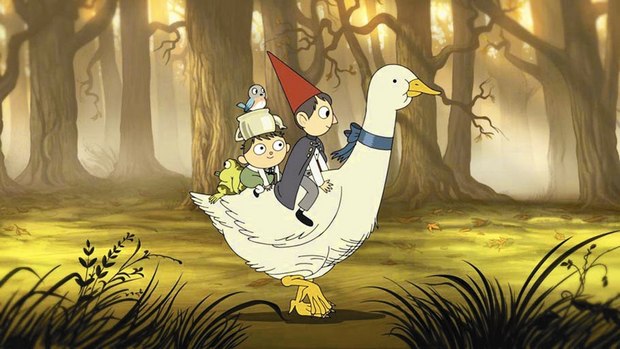 Always with an emphasis on edgy and independent, the OIAF programming team selects the most interesting, original animated features from around the world to screen in the competition. Four feature-length films make up this year’s official selection: La Montagne Magique, (The Magic Mountain), Pos Eso (Possessed), Adama, and Over The Garden Wall.

"It's fascinating to watch the continued evolution and maturity of feature animation," says Chris Robinson, OIAF’s Artistic Director. "Not only are films like The Magic Mountain and Adama tackling difficult political and historical subjects, but they're doing so using an intriguing mix of techniques. And even more conventional family fare like Possessed and Over the Garden Wall are approaching genres with an originality and diversity that is rarely seen in the feature world."

The competition opens with La Montagne Magique (The Magic Mountain), Wednesday, September 16 at 7:00 p.m. Directed by Anca Damian (Crulic - The Path to Beyond, 2011) Mountain is an animated docudrama from Romania, France, and Poland. It tells the true story of Adam Jacek Winkler, a Polish refugee who fled to Paris in the 1960s and later finds himself heading to war in Afghanistan. Motivated by shifting political climates, Winkler’s adventurous life takes a radical turn in the 1980s as he leaves France to fight alongside Commander Massoud against the Soviets in the Afghani mountainside. Mountain is framed as a final conversation between Winkler and his daughter, Ania, and is told over 87-restless minutes of technique and style. An encore presentation of The Magic Mountain will take place on September 19.

The Magic Mountain is followed by Sam Orti’s clay animated comedy horror, Pos Eso (Possessed) at 11:00 a.m. on Thursday, September 17, and again at 5:00 p.m. on Saturday, September 19. Part The Excorcist, part Ghostbusters, Possessed follows a depressed Trini, the world famous flamenco dancer who has abandoned the stage after the passing of her husband and whose 8-year-old son, Damian, spirals into rebellious behaviour no doctor can explain. The only possible explanation is he is possessed by a malicious devil that makes him do the most bloody and cruel misdeeds. From Spain, Possessed runs just over 82-minutes. It is an Ontario premiere.

On Thursday, September 17 at 7:00 p.m. and Saturday, September 19 at 9:15 p.m., audiences can see for the first time in North America the innovative, dream-like visual stylings of Adama, the debut feature-length film from French writer/director Simon Rouby. Connecting themes of spirituality and community with the political and personal realities of war, Adama is a powerful story about a 12-year old eponymous hero and his decision to leave the remote West African village in which he grew up to find his missing older brother Samba. Beyond the village, Adama travels through war-torn Europe to the hell of the front-lines to free Samba, his love for whom takes him down unexpected paths on this life-changing journey away from home.

Closing the official competition on Friday, September 18 at 7:00 p.m., and Saturday, September 19 at 3:00 p.m. is Cartoon Network’s critically-acclaimed miniseries Over The Garden Wall (U.S.A, South Korea), whose star-studded cast includes Elijah Wood, Christopher Lloyd, Shirley Jones, John Cleese, and Tim Curry. Directed by Patrick McHale, (Adventure Time), Over The Garden Wall is a classic adventure tale about two young brothers, Wirt and Greg, who find themselves lost in a strange forest. With the help of a bluebird named Beatrice and a nameless frog, Bret and Wirt travel through a magical land of clothed animals and dancing pumpkins on their way home before a mysterious beast catches up with them. Earlier this year, Over The Garden Wall received an Emmy-nomination for Outstanding Animated Program.

All feature films will be presented at Ottawa’s historic ByTowne Cinema (325 Rideau Street), the city's main venue for independent and foreign films. Admission starts at $13 for the general public, or $9 for children, seniors, and members of the Canadian Film Institute. Tickets and Festival passes are available online at www.animationfestival.ca.