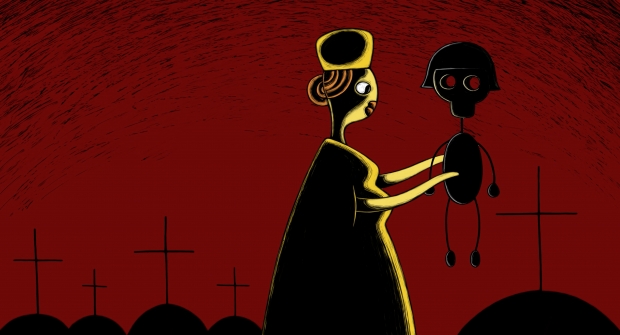 While Festival organizers are disappointed that the films won’t be shown on the big screen, showcasing them online will be a positive alternative - bringing the work to new audiences and bringing the animation community together virtually.

“The pandemic certainly hasn’t slowed animators down,” says OIAF Artistic Director, Chris Robinson. “This year’s crop of films are as solid, inspired, bizarre and diverse as any other. There’s sexual silliness (Peter Millard’s Cumcumcumcumcum Everybody and Ivan Li’s sure to be heatedly discussed short, Fruit), indie rock icons (new music videos for Sparks and The Breeders), boozy preachers (I, Barnabe), love affairs with a convict (Shoko Hara’s stop-motion documentary, Just a Guy), and some rather timely films that deal with those pandemic words we all now know so well: face touching (Leah Shore’s Don’t Touch Your Face), masks (Patrick Smith’s Beyond Noh), elderly (mis)care (Kaspar Jancis’ funny and poignant Kosmonaut) and isolation (the playful, Living in a Box by Oscar nominee, Theodore Ushev).”

It is stellar year for the National Film Board of Canada with 5 films in the Official Competition and 2 in the Canadian Panorama. The NFB selections range from the work of award-winning doc director Robin McKenna's Thanadoula to the work of Atikamekw multi-disciplinary artist Meky Ottawa (The Fake Calendar) who is a graduate of the NFB’s Hothouse program.

The Feature Film Competition offers up a chance to see films that are truly out of the ordinary. Three among the six highly diverse and unusual films are Mosley, a family film with lots of appeal for everyone. This 3d animation labour of love comes from New Zealand director Kirby Atkins. Kill It and Leave This Town is animator Mariusz Wilczynski’s first feature-length film. A personal film that looks back at Poland in the 1970s. The film premiered at the Berlin Film Festival. There’s also the zen inspired minimalist hilarity of the South African feature: Bru & Boegie: The Movie

The Ottawa International Animation Festival (OIAF) is one of the world’s leading animation events providing screenings, exhibits, workshops and entertainment since 1976. OIAF is an annual five-day event bringing art and industry together in a vibrant hub and attracting more than 34,000 artists, producers, students and animation fans from around the world.