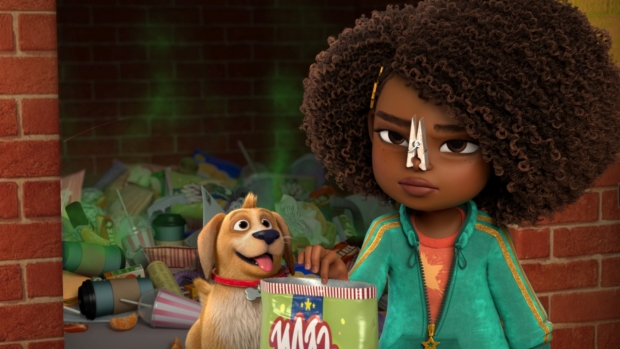 Karma’s World, originally inspired by Bridges’ oldest daughter Karma, follows Karma Grant, an aspiring musical artist and rapper with big talent and an even bigger heart. Smart, resilient, and deeply empathetic, Karma pours her soul into songwriting, channeling her feelings into whip-smart rhymes with passion, courage, and her signature brand of humor. She’s a lyrically gifted aspiring musical artist juggling rap dreams and rhyme schemes, all while using her talent, ambition, and heart to solve any problem.

The animated series returns for a fourth season with new entertaining and educational content that features original songs focusing on issues such as racial proﬁling, divorce, and community, creating a conversation driver for parents and their children. Viewers can expect more music, dance, and fun, plus new themes and storylines in episodes such as: “Keys, The Inventor” (Keys overhears a stranger grumbling that “a black kid can’t be an inventor.”); “Family Feud” (When Karma sees her parents arguing, she starts to worry that they might get divorced); and “Save the Center” (Karma discovers that the Community Center is going to be closed if they can't get the money for repairs).

The series premiered in the Top 10 in 42 countries when it launched on Netﬂix Kids, eventually garnering three NAACP Award nominations. Coming off the success of Season 3, Karma’s World launched a new line of products including toys, books, crafts, footwear, apparel and more, in addition to partnering with Mattel to create a dolls and accessories line.