‘Oeil pour Oeil’: A One-Eyed Pirate's Life for Me

Cute CG short about hijinks on the high seas from six ESMA students snags a VES nomination for Outstanding Visual Effects in a Student Project. 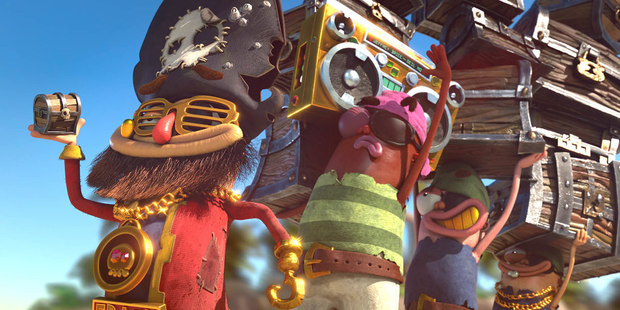 Oeil pour Oeil (An Eye for an Eye), nominated for the VES' “Outstanding Visual Effects in a Student Project” Award, is a funny, fast-paced short film co-directed by a team of six students at the French CG/VFX/Animation school, ESMA: Thomas Boileau, Alan Guimont, Robin Courtoise, Mathieu Lecroq, Malcolm Hunt and François Briantais. A comedy about an unlucky, one-eyed pirate and his one-eyed crew, Oeil pour Oeil took 18 months to produce: six months of pre-production followed by one year of production. Boileau, Lecroq and Hunt were responsible for rendering, modeling and compositing; Briantais and Courtoise handled animation and rigging; and Guimont took on FX, such as water and smoke.

The story started with Boileau’s idea for a story about one-eyed pirates. “Thomas had an idea for a short film about one-eyed pirates,” the group explains. “Due to their missing eye, many mishaps and much foolish behavior would follow. We tried to make a story out of it but it didn't work. Our teachers advised us to go for a bunch of short gags, but that wasn't really the movie we wanted to make. So, we ended up mixing those two: a bunch of gags all linked with a story, and that became our short film. We also wanted to avoid generic and bland designs. The idea was to visually stand out from what had been made at our school (ESMA) in the past. We also wanted to please kids, adults, professionals and non-professionals.”

As the team began pre-production design work, they soon realized each of their drawing styles was different, which proved a bit chaotic. But they quickly agreed on a specific look. “It was really important to all have the same clear vision on what the film should look like,” the team shared. “From that point, we could push it further until we were satisfied with the final design. That early design work became our reference to make sure the whole movie stayed visually consistent. It was very important to make sure all the designs were harmonious.”

“One big challenge was the rigging,” the co-directors noted. “Rigging is very tricky. The animators needed to move each part of the face depending upon the camera angle. We knew the mouth rig would be tricky because sometimes the mouths are open wide, with tongue and teeth, and sometimes they’re away from the face without any opening. But we also knew we could save time by using the exact same mouth on each pirate, a choice we made when designing the characters. We also needed a generic rig for the pirate’s crew, where we could re-use one basic pirate and deform to create a new one.”

Water, which was in three-fourths of all the shots, proved challenging as well. “We spent five months getting the ocean simulation to look like we wanted,” the team concluded. “We didn’t want a classic, realistic ocean. So, Alan, our FX artist, had to learn exactly how to achieve what we were looking for. It took some time.”