Created by Itai Lev and his game designer sister Tal, show follows a sentient robotic sex-doll, Lola, and the evil CEOs she encounters after her escape, in a toxic male send up featuring a style inspired by ‘Blade Runner’ and ‘Roger Rabbit.’ 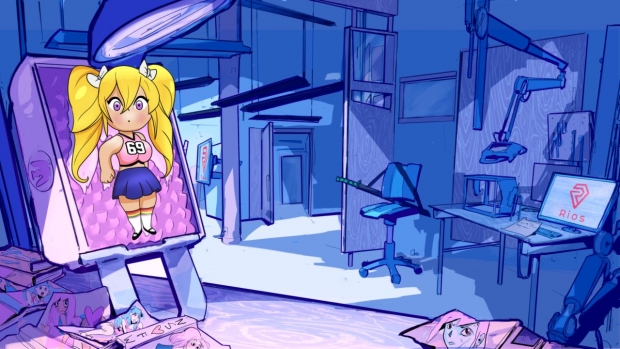 Creators Itai and Tal Lev have just shared with AWN the trailer for their raucous animated series, Loli, currently in development. The toxic male send up features a sentient anime girl sex-doll, Lola, on the run from her neckbeard creator, Zayden, in a capitalist-dystopia satire. The show’s outlandish premise is made a bit stranger by the pair behind the project: Itai Lev, a 23-year-old NYU Tisch alum, and his 17-year-old sister, Tal, an aspiring game designer.

“Loli started as this dumb joke between my sister and I,” says Itai. “It was the height of the pandemic, and I just wanted to make my sister laugh.” “I told Itai it was the dumbest idea I’d ever heard,” Tal adds. “Then he wrote a draft anyway, and it was pretty funny. I don’t really write, but it’s something I wanna watch, so I got involved.”

The darkly irreverent series follows Lola, a robotic anime girl, as she travels across the country, wreaking havoc and avoiding capture from her creator, Zayden. Along the way, she comes into conflict with eight evil CEOs who want Lola for themselves.

In the pilot, Lola wants to be become the it-girl at a middle school run by the Revere firearm corporation. She succeeds, but comes under literal fire by the company, leaving Zayden to pick up the pieces as she gets away.

“You can think of Lola and Zayden’s cat-and-mouse dynamic as a traveling circus, setting up shop along our dystopian US map,” says Itai, “We get in, mine the scenario for 11 minutes of jokes with our personification of toxic males (Zayden) and the impossible standard they hold woman to (Lola), and get out. The possibilities are seemingly infinite.”

“Lola is a sex-object with agency,” Tal notes. “The entire world is against her, but she always gets her way You don’t get to see female tricksters very often, so she’s fun to root for, even though she’s a sociopath.”

Visually, Loli’s world resembles a brighter-hued Blade Runner, with realistically drawn human characters.  Lola, however, is drawn in an anime style, clashing with the world and people around her like an anime Roger Rabbit.

“When I tell [older people] about it, they don’t really get it,” Tal explains. “They don’t know about memes, or Only Fans, or Genshin Impact.” Noting that Loli is current to what people her age are going through, and that the idea may seem foreign, or even scary, to older people, Itai admits. “Misogyny and corporate greed aren't fun topics, but with Loli, we’ve managed to touch on them in a really funny way.”

Tal, who came out as transgender while working on the project, elaborates. “The characters are sexist, but the show isn’t. Zayden and Lola are bad people who always get away, and learn nothing, which seems to be the pattern in real life. [Loli] lets us laugh at what’s scaring us. It’s smart and its dumb.”

The brother and sister pair sent Loli’s pilot script to the Nickelodeon Fellowship in 2020; while they didn’t win, they received extremely positive feedback, enough that the Levs have put together a team of other young, hungry artists through Itai’s Tisch network and freelancing sites. After a year of work, they’ve put together a pitch deck and promo to help sell the series.

While 2021 saw the success of many new adult animated programs, the Levs are confident Loli will stand out for its high concept premise, female protagonist, and internet influenced humor. “Loli made us laugh at a time when things couldn’t have been more scary,” Itai says. “I just want to share that.” More bluntly, Tal shares, “Everyone under 30 is going to want to watch this. There’s never been anything like it.”

Contact the creators for more information on the series.