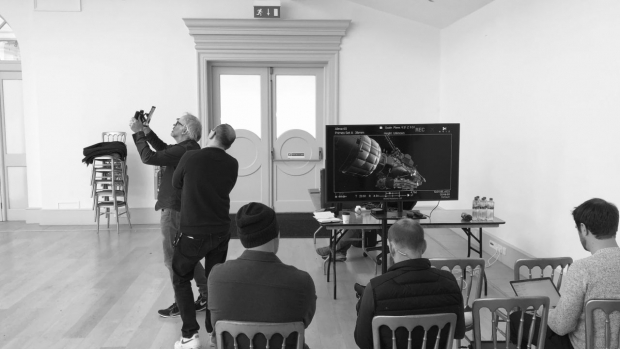 How do you plan for shooting dangerous, potentially life-threatening scenes, set in space, without being in space or putting your actors in harm’s way? This was the question posed by director George Clooney, and director of photography Martin Ruhe, to the VFX team on Netflix’s VES Award-winning and Oscar-nominated sci-fi drama, The Midnight Sky.

“Planning the spacewalk and Maya’s subsequent death was the largest part of pre-production work for visual effects,” VFX supervisor Matt Kasmir says.  “From the start, it was incredibly important that they were grounded in reality, using the same filmic principles in space that we use on earth.”

Kasmir and executive producer Greg Baxter enlisted NVIZ to help.  Led by head of visualization, Janek Lender, the team at NVIZ initially helped visualize Maya’s death, which takes place in the confined space of the Aether (spaceship) airlock.  Working with production designer Jim Bissell, the team used Art Department plans and created a digital airlock environment.  Once this was approved, the animation blocking for Maya’s death could begin.

“From the start, both George and Martin were keen to work with new technologies to develop these sequences,” Kasmir explains.  “We all agreed that the route of traditional previs, animating individual shots, was not to the right path to take.  The focus was on the story, on our characters, and so we chose to visualize their movements in the airlock as a complete performance.” Ruhe and Lender created a “master animation” for Maya’s death, blocking out the continuous action of the characters in the airlock, all the time viewing this from an objective camera, an angle that would not be seen in the film as the camera would have been floating outside the Aether to achieve it.

“This kept us focused on the performance and allowed us to block out the travel of the characters from when the crew entered the airlock to their final positions at the end of the scene,” said Lender.

Once Ruhe was happy with the blocking, the animation was transferred to Epic’s Unreal Engine and the controls fully handed over to Clooney and Ruhe. “George and Martin were intrigued by not only ‘shooting’ the previs through a virtual camera system, but also using this method to develop the sequences during both pre-production and principal photography," Kasmir notes.

NVIZ’s virtual camera system, ARENA, was set up in the Orangery in Shepperton Studios for the first virtual cinematography session. “ARENA works like a ‘director's viewfinder’ allowing directors and DoPs to lens their shots ahead of principal photography,” says Lender. “The full set-up is very light and consists of a PC and a tablet.  Martin would move around the physical space of the Orangery viewing the animation we created through the ARENA tablet.  We integrated Martin’s preferred set of lenses and both shooting camera bodies into the system so that the sessions were as close to a technical rehearsal as possible.” Over approximately 10 sessions, Ruhe planned Maya’s death in a way not previously possible, and with ARENA’s output being recorded, “digital rushes” were supplied directly to editorial for cutting in.

According to Lender, “In one ARENA session, Martin was attempting to shoot-up from a low angle and realized that the camera could not get low enough to the floor (as it was too big).  Through discussion with the Art Department, the set design was altered slightly to include a strategically placed trough, which was large enough to accommodate the camera.”

The team at NVIZ followed a similar process for the spacewalk, in which a number of Aether crew members go outside to perform repairs, during which time the ship encounters a second debris field.

Working again with Bissell and VFX art director Jonathan Opgenhaffen, a fully 3D model of the Aether spaceship was incorporated into the master animation scene for this sequence, allowing Ruhe and Lender to accurately block the path of the crew as they moved across the ship.

“Knowing the topography of the ship and the areas of damage that the crew were to work on was invaluable for blocking out the action, the characters’ movements, and the impacting debris field,” Lender reveals. “And, on occasion, the blocking also fed back into the Aether design determining, for example, where a hand-hold would need to be, or an attachment point for the crew’s tethers.” The Orangery was not big enough to mark out the full length of the spaceship, so the team temporarily moved to W Stage.  Here the set pieces were lined-up to plan, and Ruhe walked the length of the spaceship viewing the debris hitting the ship in real-time, through ARENA.  This process allowed the filmmakers to further understand the journey of the crew and helped establish the timings of the sequences.

“During the sequence’s first ARENA session, Clooney took the system and immediately started walking around the space and describing, in amazing detail, the beats of the sequence, shot-by-shot,” says Kasmir. “It was an organic, evolving process which helped us to get further, faster.  It informed design decisions early in the process, which fed down throughout the entire production process.”

The main ARENA sessions for the spacewalk took place over 2 ½ weeks, in and around the principal photography in Iceland.  These virtual cinematography sessions became a place where all production departments discussed the logistical and technical demands of the live-action shoot.  A digital model of the 3D gantry rig (wire rig), on which the actors were to perform, was incorporated into the digital environment and, working with stunt coordinator Paul Linney, Lender and his NVIZ team could show where any piece of set-build would block the trajectory of the rig moving the actors.

Part of filmmaking is planning, and as our imagination takes us to new places, new technologies help us to visualize, not only the final process, but the steps we need to take to get us there.