To support artistic ‘side hustles,’ new initiative features key technology and resources, helping artists up their game; the platform lets artist share their creative journeys - such as CG Geek, who built an intricate 3D world with the help of NVIDIA Studio technologies. 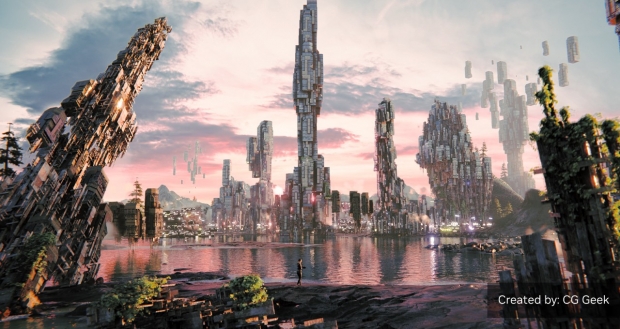 NVIDIA Studio has introduced Creative ‘5-to-9,’ a new initiative and hub to support creators with the technology and resources needed to take their endeavors to the next level. For inspiration, artists can check out the journeys of other creatives, learn more about NVIDIA’s AI tools and access the latest tutorials.

For example, the visual effects and animation wizard CG Geek recently stepped into the NVIDIA Studio to share how he built an intricate sci-fi 3D world in three days during CES. He fast-tracked the timed design challenge with NVIDIA Studio technologies and his GeForce RTX 4090 GPU.

In addition, CG Geek teaches aspiring animators how to get started and provides Blender tutorials on his YouTube channel. Before getting started, he took a poll on various social media sites for a genre to use as a starting point for the project, with sci-fi winning out.

Beginning his work in Blender, he created his 3D world, The Fullness of Time, by forming simple shapes and scaling them to match the sizes of real-world buildings. Next, he applied detailed textures with Adobe Photoshop, which was made possible by a new GPU-accelerated feature on his GeForce RTX 4090 GPU. Finally, he exported textures across the entire piece using the recently announced RTX-accelerated Super Resolution feature (demonstrated at CES), which uses AI to upscale higher-quality images. Watch CG Geek’s How I Created a Realistic 3D Sci-Fi World in only 3 Days:

You can check out this week’s In the NVIDIA Studio blog post, with complementary assets attached, to learn more about CG Geek and visit his work and tutorials here.