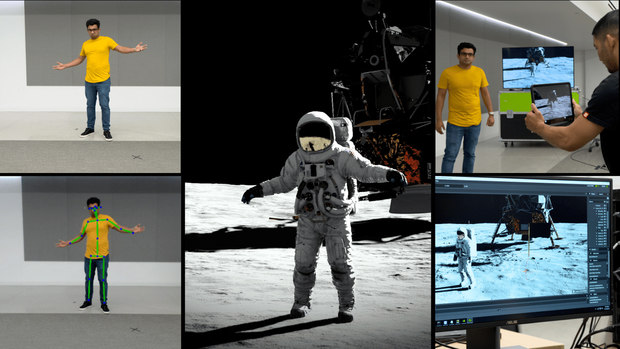 One small step for man… one giant leap for real-time rendering and ray tracing.  All happening on the surface of a virtual moon this week at SIGGRAPH 2019 in Los Angeles.

To celebrate the 50th anniversary of the Apollo 11 moon landing, NVIDIA is showcasing an innovative RTX- powered interactive demo that takes attendees on a trip to the moon and back.

Visitors to the NVIDIA booth will immediately recognize a familiar, historic scene on display: a photoreal, rendered recreation of the moon landing with an astronaut standing next to the Apollo 11 lander. But, stepping closer, they’ll notice the astronaut starts to move — and it’s copying their exact movements.

A single camera is set up in the booth to capture a person’s poses and match their movements to the 3D-rendered astronaut. Using pose estimation technology designed by NVIDIA Research, the interactive demo doesn’t require any special suits, multiple cameras or a depth sensor — it just requires a willing participant and an off-the-shelf webcam.

With real-time ray tracing to render every detail, combined with Omniverse – NVIDIA’S open collaboration platform that streamlines 2D and 3D product pipelines – the demo projects a photoreal 3D image of attendees as if they were an astronaut exploring a real moonscape that is literally out of this world.

NVIDIA's research team has developed a state-of-the-art method that reconstructs the 3D human body motion and position from a single 2D video feed. With pose estimation technology, the Tensor Cores in RTX GPUs speed up the AI inference to understand the person's movements. That information is then translated and sent to the Omniverse renderer to match the precise movements to the 3D astronaut.

The result is that the moment someone steps into the NVIDIA booth, they’re virtually transported into space to relive the historic moon-landing moment.

From the moon rocks strewn about to the Apollo 11 lander, the realistic details in the scene are made possible through NVIDIA RTX technology. It creates stunning levels of realism while simulating how the sun’s rays react to the moon’s surface in real time. The interplay of lights and shadows give incredible new perspectives on the moon landing.