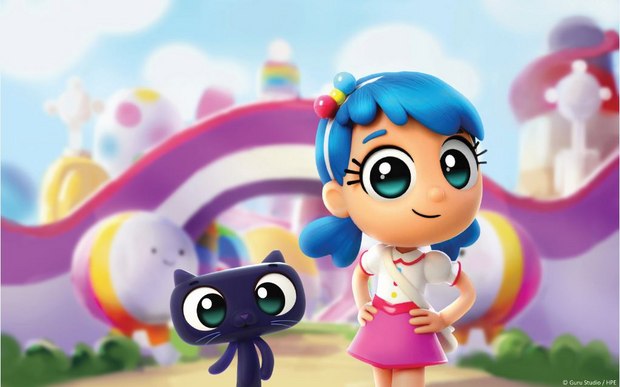 Messages of discovery, ingenuity and compassion may have fueled Netflix’s latest original series, True & the Rainbow Kingdom. But behind the scenes, NVIDIA Quadro GPUs will power every pixel audiences of the animated children’s series will see on their screens.

When Netflix wanted to commission an innovative comedy adventure series for preschoolers, they looked to Guru Studio. The entertainment company specializes in animation and has a track record of developing successful, internationally acclaimed shows. Together with Home Plate Entertainment and i am OTHER, Guru developed True & the Rainbow Kingdom, set to premiere globally in summer 2017 as a Netflix Original.

The series is based on artwork by fine-art collaborative Friends With You and its messages of magic, luck and friendship. The series is produced on an entirely GPU-based workflow using Redshift, an engine built from the ground up for GPU rendering that runs exclusively on NVIDIA GPUs.

“CPU rendering is the way rendering has been done since the beginning of CG,” says Yurie Rocha, computer graphics supervisor at Guru. “GPU renderers have existed in the market for some time, but there were always compromises because the cards could only handle so much data. With the release of the NVIDIA Quadro M6000 with 24GB of memory, any concerns or compromises are no longer an issue.”

Rocha says the Quadro M6000 marks a turning point in the CPU vs. GPU debate. “Artists can now push scenes to their limits without fear of significant performance loss or being hampered by technical concerns that inhibit creativity,” he says.

When comparing scenes rendered with Redshift using CPUs vs. GPUs, the team at Guru experienced a 10x increase in speed. Then they added the latest Quadro 24GB to their HP Z840 workstations loaded with a 250GB HP Z Turbo Drive G2. This gave them a further 20 percent speed increase while rendering complex scenes, allowing them to dive into production with confidence and no compromise in quality for speed.

“This is a huge paradigm shift for how we do work here at Guru Studio, with many more companies sure to follow,” Rocha says. “We have yet to find a scene the M6000 can't handle. That peace of mind is crucial to maintaining our quick turnaround production schedule.”

To support this project and a growing number of others, Guru expanded its render farm capacity. Guru looked at all options: cloud rendering, co-location and GPU rendering. In the end, it chose a new GPU farm, which was half the cost of a CPU farm, occupied half the space in the server room and was easier to deploy. It also had the added benefit of keeping Guru’s material securely in house.

“I knew I could reliably build a render farm onsite with the NVIDIA Quadro M6000 and it turned out to be comparable to something that would’ve cost twice as much if done traditionally,” Rocha says. “Switching to GPUs has given us a competitive advantage.”

Learn more about the making of True & the Rainbow Kingdom from Yurie Rocha during his talk, “Exclusively using NVIDIA GPUs and Redshift to deliver the next wave of original content,” at SIGGRAPH 2016 in the NVIDIA theater on July 26 at 2:25 p.m. Pacific time.