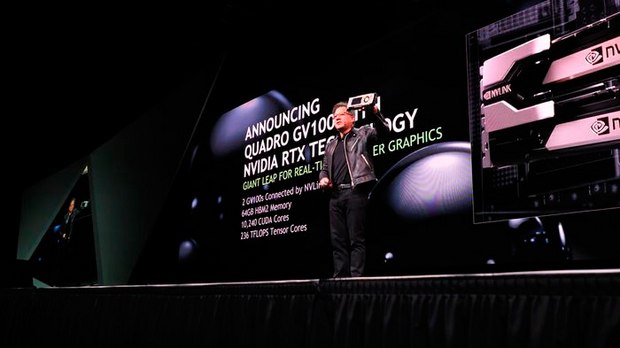 Media and entertainment professionals can see and interact with their creations with correct light and shadows, and do complex renders up to 10 times faster than with a CPU alone. Product designers and architects can create interactive, photoreal visualizations of massive 3D models -- all in real time.

“NVIDIA has reinvented the workstation by taking ray-tracing technology optimized for our Volta architecture, and marrying it with the highest-performance hardware ever put in a workstation,” said Bob Pette, VP of professional visualization at NVIDIA. “Artists and designers can simulate and interact with their creations in ways never before possible, which will fundamentally change workflows across many industries.”

NVIDIA RTX technology was introduced last week at the annual Game Developers Conference. NVIDIA this week announced that it is supported by more than two dozen of the world’s leading professional design and creative applications with a combined user base of more than 25 million customers.

The Quadro GV100 GPU, with 32GB of memory, scalable to 64GB with multiple Quadro GPUs using NVIDIA NVLink interconnect technology, is the highest-performance platform available for these applications. Based on NVIDIA’s Volta GPU architecture, the GV100 packs 7.4 teraflops of double-precision, 14.8 teraflops of single-precision and 118.5 teraflops of deep learning performance. And the NVIDIA OptiX AI-denoiser built into NVIDIA RTX delivers almost 100 times the performance of CPUs for real-time, noise-free rendering.

Other benefits of Quadro GV100 with NVIDIA RTX technology include:

A broad range of software developers are showing strong support for GV100 and real-time ray tracing.

The Quadro GV100 GPU is available now on nvidia.com, and starting in April from leading workstation manufacturers, including Dell EMC, HP, Lenovo and Fujitsu, and authorized distribution partners, including PNY Technologies in North America and Europe, ELSA/Ryoyo in Japan and Leadtek in Asia Pacific.