In his virtual GTC keynote, company founder and CEO Jensen Huang introduced a host of new technologies, including his Toy Jensen miniature avatar, to demonstrate transformative uses of the tech giant’s latest offerings in accelerated computing and the Omniverse Enterprise virtual world simulation and collaboration platform. 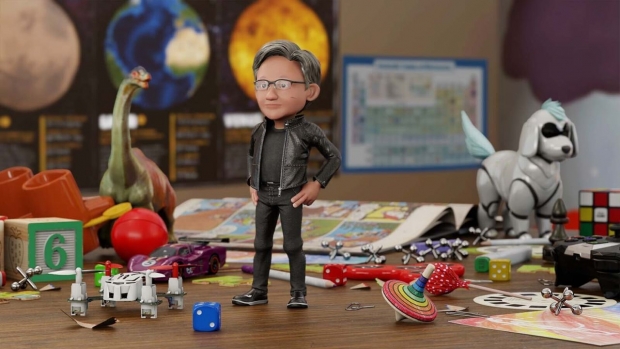 In describing how NVIDIA will help simulate everything from self-driving vehicles to avatars, robotics, even planet Earth itself, Huang introduced NVIDIA Omniverse Avatar and NVIDIA Omniverse Replicator, among a host of announcements.

With particular significance to the animation, VFX and related visual content industries, Huang also demonstrated the confluence of AI and simulation with a miniature avatar -- Toy Jensen -- that answered complex questions using a combination of NVIDIA technologies.

But core to Huang’s talk is the company’s expansive NVIDIA Omniverse, the virtual world simulation and collaboration platform for 3D workflows that brings all the company’s vast technology together. According to Huang, with Omniverse, “we now have the technology to create new 3D worlds or model our physical world.”

This past August, NVIDIA announced a major expansion of NVIDIA Omniverse through new integrations with Blender and Adobe that will open the innovative system up to millions more users. Key to Omniverse’s industry support is Pixar’s open-source USD — the foundation of Omniverse’s collaboration and simulation platform — enabling large teams to work simultaneously across multiple software applications on a shared 3D scene. This open standard framework gives software partners multiple ways to extend and connect to Omniverse, whether through USD adoption and support, or building a plugin, or via an Omniverse Connector or Extension.

NVIDIA Omniverse Enterprise, now available through selected global systems manufacturers like BOXX Technologies and PNY, is a scalable, multi-GPU collaboration platform studios can deploy on a subscription basis to bring together designers, artists, and reviewers to work together from anywhere in real-time across leading software applications in a shared virtual world.  The rise of remote work, globally spread teams, an explosion in the number of often incompatible software tools, and the demand for compute-heavy technologies makes design collaboration exponentially harder. And with the crush of projects and nomadic workforces resulting from the ongoing pandemic, such a robust collaboration platform is more critical than ever. Omniverse Enterprise starts at $9,000 a year.

Or watch the entire presentation:

He also showed a demo of Project Tokkio, a customer-service avatar in a restaurant kiosk, able to see, converse with and understand two customers.

A demo showed a woman speaking English on a video call in a noisy cafe, but she can be heard clearly without background noise. As she speaks, her words are transcribed and translated in real time into French, German and Spanish. Omniverse allows the avatar to engage in conversation with her same voice and intonation.

“A constant theme you’ll see — how Omniverse is used to simulate digital twins of warehouses, plants and factories, of physical and biological systems, the 5G edge, robots, self-driving cars, and even avatars,” Huang added.