New app unveiled at IndieCade 2017 speeds up animation and rigging. 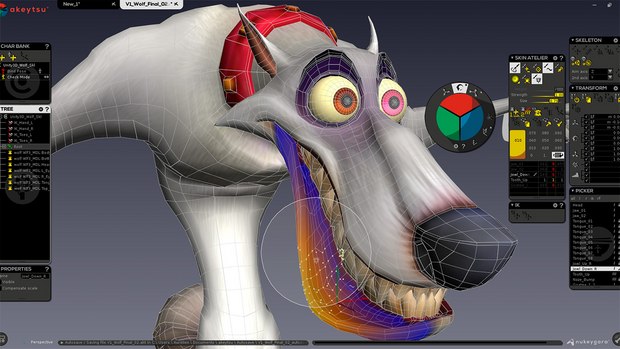 LOS ANGELES -- After four years of rigorous development and testing, software animation pioneers Nukeygara announce today at IndieCade 2017 the official release of Akeytsu, a new tool designed to simplify the animation process and make it as much as 15 times faster, according to its beta users.

Offering an artist-friendly UI and a host of industry-first tools, Akeytsu is one of the fastest and easiest-to-use rigging and animation programs available for game development. Early access pricing is available until the official release on Oct. 25.

“As a lead animator, I was constantly bothered by the heavy and complex 3-D tools needed for rigging and animation, and I wasn’t alone,” said Nukeygara co-founder and CEO, Aurélien Charrier. “So we started rethinking and reinventing animation tools to make them simple, intuitive and more productive. We were able to do all that and more with Akeytsu, and this is just the beginning.”

The official release of Akeytsu features several time-saving industry-first tools, including a new IK/FK solver, a first of its kind half rig mirroring process, partial cycling automation, a new way to keyframe and much more.

A few of the new industry-first features in Akeytsu include:

Akeytsu is designed for use by small indie teams, larger professional studios or even students looking to experiment with animation software. Using the FBX file format, animators can bring their models into Akeytsu from any 3D package, and then return the modified file to the original program -- including game engines -- to complete the rendering.

“Akeytsu has an amazing user interface,” said Andre Gauthier, head of Unity’s Montreal R&D studio. “It is an extremely well designed character animation tool, and it imports seamlessly in Unity.”

To help develop and polish Akeytsu, Nukeygara put it through a demanding two-year beta process, conducted by over 3,000 animators who used it for gaming, as well animation projects for other mediums. The beta also helped to confirm many of the concerns of Nukeygara’s founders, who felt that current animation tools were unnecessarily convoluted. The result is the first 3D program to provide character keyframe animation and rigging features all in one package, simplifying and speeding up the animation process without compromising on quality.

"Akeytsu cuts down on the effort and cost our studio expends to create top-quality animations,” said Richard Bisso, co-founder and CTO of Hyperkinetic Studios. “By allowing our artists to switch back and forth between animation and rigging with minimal time loss, we can focus on using the time we save to create more great content for our game Epic Tavern."

Akeytsu will be available in three versions: Learn (free for students and teachers, $39 for educational institutions), Indie ($179) and Pro ($589). In order to qualify for the Learn version, users need only verify that they are current students and use the program for non-commercial projects. The commercial use of the Indie and Pro versions will be determined by the revenue of the company using the program.

In celebration of IndieCade’s 10th Anniversary, Nukeygara will continue to offer its Early Access pricing throughout the show and until the official Akeytsu launch on October 25, 2017. Purchasers can download the Akeytsu beta now at the deeply discounted Early Access price, then once the official version is released they will be upgraded at no additional cost. Akeytsu Early Access pricing is: Learn (free for students and teachers, $16.99 for educational institutions), Indie ($79) and Pro ($279).