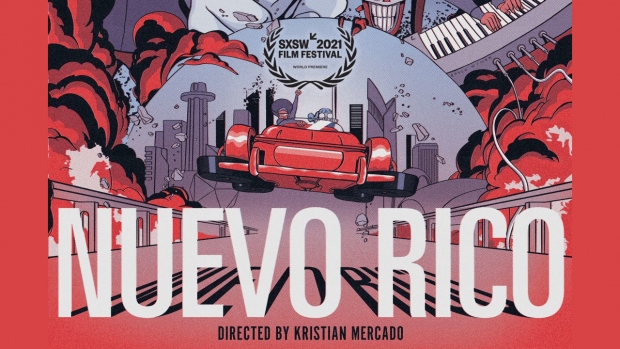 SXSW Film Festival program honors superlative creativity and talent demonstrated by filmmakers and designers. The 2021 Jury Awards were announced today – the Audience Awards will be announced on March 22. In the category of animated shorts, three films were honored, with an award going to the overall winner, as well as special jury recognition for innovation and storytelling.

“Be prepared for this dystopian tragedy to rip your hair out by the roots and pour liquid vaporwave rainbows directly onto your brain’s tongue. A cautionary tale of friendship and fame, Nuevo Rico slaps convention to the ground and stomps on it with steel toed boots of satisfying stylistic innovation. Kristian Mercado Figueroa doesn’t give a fuck — and gives all the fucks at the same time. If you’ve never wrestled a laser snake in a Lambo going two hundred off a cliff into an iridescent volcano, Nuevo Rico will make you feel like you have.”

Mercado Figueroa is a Puerto Rican filmmaker living in Spanish Harlem whose music-driven short film Pa’lante won the SXSW Jury Award 2019. His screenplay “HawkBells” was awarded at Slamdance for screenwriting in 2020. He was an official selection at SXSW 2020 for both Grammy-nominated Black Pumas and Miami Nights. Mercado Figueroa also directed Comedy Specials coming to Netflix for Hannibal Buress and SNL's Sam Jay slated for summer release, as well as content for Adult Swim, Bad Bunny, Billie Eilish, Awkwafina, and MF DOOM. “An awe-inspiring masterclass in creativity, resourcefulness, and innovative lighting and stop-motion techniques. This film manages to elevate simplistic materials to create mesmerizing sequences, while also taking you on a poetic, dreamy, and emotional journey that serves as a beautiful tribute to a mother’s love.” Your Own Bullshit - Director: Daria Kopiec

“We the jury have selected Your Own Bullshit for a Jury Recognition for Storytelling for its masterful and experimental take on a vastly relatable human story. Its stylistic choices, humor, sound design, character development, and pace bring excitement to a topic under which it is not easy to push boundaries. Yet, it does just that.”

Your Own Bullshit, dir. Daria Kopiec - trailer from Studio Munka on Vimeo.