Not To Scale Designs the Ultimate Mascot for New EE Campaign 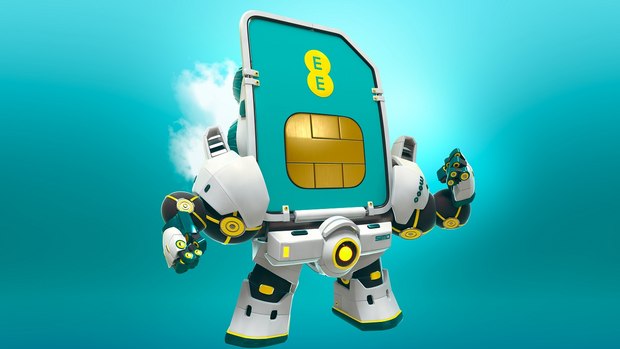 LONDON – Not to Scale was approached by Saatchi & Saatchi to design and create a character for EE’s fastest and most powerful sim card, the SIMOTRON 3000. Directors Pierre Ducas and Bertrand Bey (Pierre + Bertrand) brought the scripts to life by transforming the qualities of the sim card into the hilarious character traits of a robot.

“Our robot will represent the capabilities of the sim card, so it evolves around power, speed, size and the idea that it will transform the customers experience,” commented Pierre + Bertrand.

Toys were a big inspiration when it came to design as P+B wanted to create something that people would like to touch and play with.

“Our way of designing this particular robot was to take the main product, in this case a sim card and design everything from that shape; from the main body to the arms and legs, the shape of the sim card can be seen throughout,” remarked Ducos, Director.

“Animating a robot in action sequences was pretty straightforward but bringing out of it a strong personality was a big challenge. The script was full of comedy scenes and it’s always quite difficult to illustrate a feeling, let alone create one on a robot with no eyes, no mouth, no eye brows. But I think we got there in the end and managed to achieve it,” added Bey, Director.

“Pierre and Bertrand have brought our moonwalking, dating app loving Simotron to life brilliantly. There are wonderful touches and details throughout to ensure that our little bot really packs a punch in the crowded market of phone deals and packages," concluded Suzanne Hails, Saatchi & Saatchi.

The result was an original and wonderfully accomplished robot who can swipe right at the speed of light, an eccentric character who starts off quite cute and clumsy before pulling some serious moves on the dance floor and diving head first into a smartphone.