Animated music video for ‘To My Surprise’ by James is inspired by elements of anime, propaganda art, Diego Rivera’s murals, and graffiti paintings. 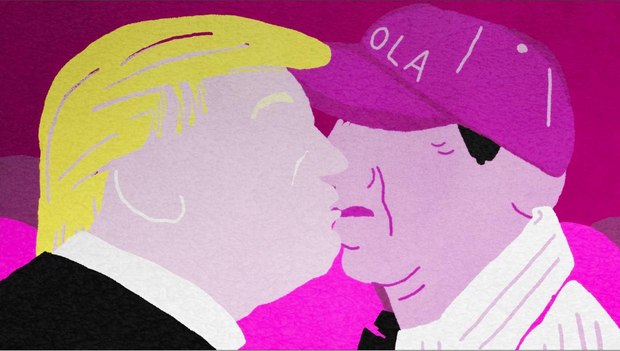 LONDON -- Film and animation studio Not To Scale and director Kris Merc, recently teamed up with the band James to create the animated music video for the band’s hit song To My Surprise. Based on a concept by Not To Scale’s founder Dan O’Rourke and director Kris Merc, the film is inspired by elements of anime, propaganda art, Diego Rivera’s murals, and graffiti paintings, the video is loaded with imagery that reflects modern society in a hyper-real, borderline dystopic way. With a less-is-more style that emphasizes blackness and the gesture of a brushstroke, the film portrays and deftly weaves together issues such as the war economy, the culture of distraction, gun proliferation, class inequality, and extreme consumerism.

James is an English rock band from Manchester, known for its hit singles such as “Come Home,” “Sit Down,” and “She’s a Star.” Regarding his partnership with lead singer Tim Booth, Merc commented, “He’s an amazing collaborator and artist, totally supportive with strong suggestions that improved the film.”

The narrative was central to the creative process, informing both the animation and design. Starting from the idea of a powerful female lead, the team fed off the momentum and emotion of “To My Surprise” to bring this dark world to life and to create a story where bright, spiritual, Tantric visuals could then overcome these darker themes. Overall, according to Merc, the narrative culminates in the question “what if love was the driving force of our cultures and interactions?”

Merc added, “It’s almost documentation of certain cross roads that we, as a society, find ourselves in; it's a snapshot of this current time; it's a cautionary tale that celebrates the human will to strive for better when faced with what seems like insurmountable odds.”