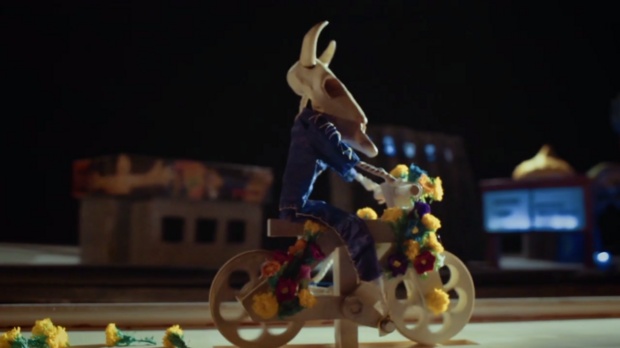 Created for the Tucson, AZ-based Sun Bones -- Reckart’s high school chums, natch -- “Arms” was created in between other projects the director has underway, including Sony Picture Animation’s forthcoming feature The Lamb.

“Tucson has changed a lot in the decade since we graduated high school, and this video is a love letter to the town we grew up in,” Reckart says of the project.

Working under what the director calls a “super small budget,” Reckart and crew -- mostly friends and family -- built the all the puppets, sets and props in their spare time, and then shot the video outside his parents’ garage, which was the only place they could set miniature buildings on fire without paying for insurance.

“It's a new technique for me -- live-action puppetry and hand-cranked automata,” Reckart comments about his technical approach to making the video. “After years of doing seven seconds a day in stop-motion, it was pretty cool to work at one second per second.” “The video is set in sort of an underworld Tucson, some kind of purgatory for all the buildings that have closed since we were kids: the old drive-in movie theater, a favorite pizza place, a miniature golf course with a tiki head, that sort of thing,” Reckart explains. “It was a low-budget project, so I spent a couple months fabricating and painting the buildings in my spare time. The Tiki head is made out of three Domino's pizza boxes I saved in the corner of the living room, which my wife wasn't too happy about,” he adds.

“The characters are inspired by the imagery of Día de los Muertos, which is a big deal in Tucson,” Reckart continues. “We have an annual All Souls procession that incorporates a lot of that imagery, plus a circus-like element of acrobats, fire-dancers, and the best part, awesome, elaborate costumes. We had to set everything on fire at the end, but there was no money for insurance. So one weekend I packed up the gear and the props and drove down to my parents' house in Tucson, and we lit everything on fire in their driveway. I've been making weird movies since middle school, so my parents are used to this sort of thing. It was really great to go back to my hometown, get together with the Sun Bones, and pull a few all-nighters playing with matches and a bottle of lighter fluid. Which is probably how a lot of people do hometown reunions, but we got a music video out of it.”