Young kids are led by the games’ lead character, Mr. Grouper, on a virtual field trip to The Metropolitan Museum of Art; art appreciation is fostered while kids learn about art from different countries and cultures. 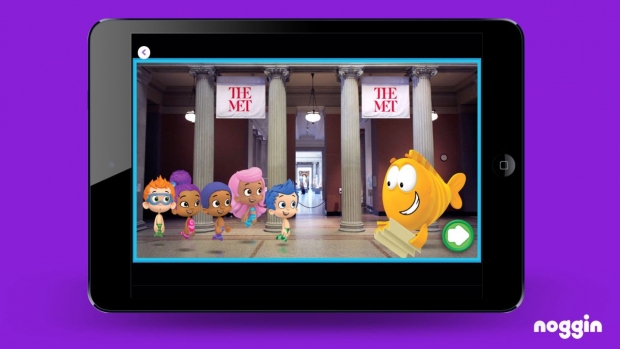 Nickelodeon’s interactive learning platform Noggin has launched Bubble Guppies: Dive into The Met, a game that takes kids on a virtual field trip to The Metropolitan Museum of Art where they can explore art from different cultures and countries. The game is aimed at kids ages 2-7. It builds creativity and critical thinking skills while encouraging an appreciation for different cultures and the arts. It aligns with the platform’s standards-based learning framework and serves as the first release under its expanded early learning programs: Big Hearts, Mighty Minds, Healthy Heroes, and Brave Explorers.

Bubble Guppies: Dive into The Met help young learners identify and understand details and characteristics of each work of art with information provided in consultation with educators and curators from The Met. It also fosters concepts and skills such as art appreciation through an examination of the artwork’s story; artistic expression, as children create their own artwork; and decision making, with tools to curate and customize art they create themselves. Bubble Guppies: Dive into The Met is available on Noggin and on the Met website.

In the game, the lead character, Mr. Grouper, takes the Bubble Guppies to The Metropolitan Museum of Art for a field trip to study works of art originating from Japan, Ancient Egypt, France, India, and the Netherlands. Young learners, parents, and teachers can find out more about the diverse styles and time periods of the artwork. They can also explore their own artistic interests with stickers and paint tools to create their own image inspired by the artworks from The Met collection.

Five featured works of art include:

Additional Resources for Educators and Parents can be found on the Noggin website.