Launched in collaboration with the Mountain View, CA startup’s innovative Virtual Studio Service Platform, ‘Disrupted’ is the story of Ben, a 40ish unexpectedly unemployed animator, and his disillusioned and absurd path back into the workforce. 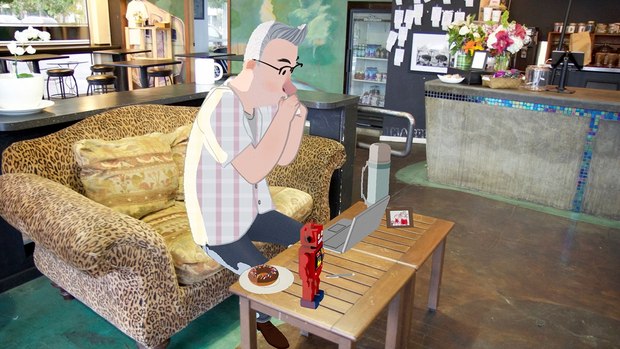 Launched in collaboration with Nimble Collective’s innovative Virtual Studio Service Platform, Disrupted is the story of Ben, a 40ish unexpectedly unemployed DreamWorks Animation director, and his disillusioned and absurd path back into the workforce.

Unlike many animated shorts, the series location is based in a real coffee shop (Backyard Coffee, in Redwood City, CA) and depicts director Brian Newlin’s real-life events with 3D characters delightfully animated on background plates (pictures) of the coffee shop -- animation on top of reality.

Disrupted is one of several animated films created as part of Nimble Collective’s Pilot Program and allows creators to leverage experience and guidance from Academy Award-winning industry innovators. The Pilot Program is an incubation of first-time directors and outside talent assembled to make the creators’ dreams a reality and an integral part of the development, testing and validation of the Nimble Collective Platform.