The macabre short from writer-director Joe Hsieh continues its festival circuit success since qualifying for this year’s Oscars and scoring an Annie nomination for best short subject. 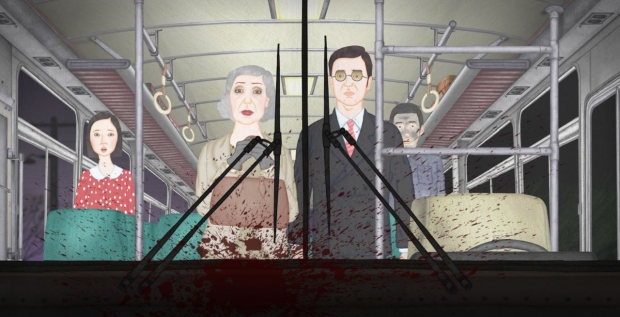 The Burbank-based entertainment and tech company, XRM Media, presented Hsieh with the award when Sundance announced its competition winners on Twitter. The festival’s nod adds to the film’s growing list of honors, which includes Animafest Zagreb’s coveted Grand Prix and Ottawa International Animation Festival’s Public Prize, as well as a nomination for best short subject at the upcoming Annie Awards. It also adds momentum to the Night Bus team’s push toward Oscar season, as the film has been selected to represent Taiwan in the Best Animated Short Film category at the 94th Academy Awards.

Hsieh’s 20-minute short is set on a late-night bus, where a wealthy elderly woman, a husband and his pregnant wife, two construction workers, and a strange young man share one trip that triggers a serious of transformative events.

Speaking with AWN in December, Hsieh said that although his short isn’t a straight horror piece, its punctuated bursts of violence help accentuate the disturbing dimensions of human nature displayed by its characters. “I infused dark humor by way of ‘over-the-top’ violence -- something inspired by Quentin Tarantino,” he explains. “Night Bus builds on suspense, and selective use of violence can help that build-up of emotion.”

Asked what his continued success on the festival circuit means for the Taiwanese animation industry, Hsieh says he hopes that Night Bus is just a small sample of the impact the region will have.

“Despite its small geographic size and population, Taiwan is extremely rich in culture and traditions that help inspired local talents and productions, myself included,” he says. “With the modest success of Night Bus on the international stage, I hope that it will inject a shot of confidence in local animators and pave a way for them to walk the international stage in the future.”