Brand-new episodes of ‘The Loud House,’ ‘Sanjay and Craig’ and ‘Alvinnn!!! and The Chipmunks’ also set to premiere throughout June. 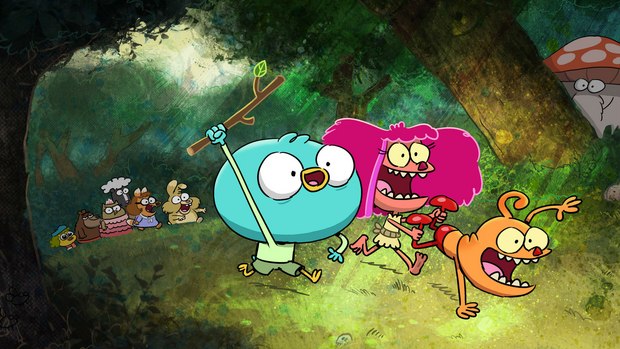 The adventures of Harvey, Fee and Foo continue in Nickelodeon’s Harvey Beaks beginning today, Monday, June 6, at 5:30 p.m. (ET/PT). Created and executive produced by C.H. Greenblatt (Chowder), Harvey Beaks follows the life of a big-hearted and big-headed kid and his impetuous two best friends. Together with an odd assortment of townsfolk in their magical forest, they get into all sorts of adventures and trouble. But no matter how ridiculous things get, they always find a way to stay true to themselves. The series will air weekdays at 5:30 p.m. (ET/PT) throughout June on Nickelodeon.

In today’s premiere, “King of the Castle,” the friends stumble upon an abandoned junkyard and build an awesome castle out of garbage, but their kingdom is threatened by a mysterious monster…named Princess. Then in “Wade is Cooler than Dade,” Dade tries to change to be cool like his younger brother, but soon discovers the real change is being a better brother.

During the series, Harvey’s world grows by leaps and bounds and the fun continues with the additions of a baby sister, grandparents, a wedding, a steampunk fantasy and more. There’s no telling what will be around the corner for Harvey and his friends of Littlebark Grove.

Original episodes of Nickelodeon’s newest animated series, The Loud House, Sanjay and Craig, and Alvinnn!!! and The Chipmunks will also premiere throughout the month.