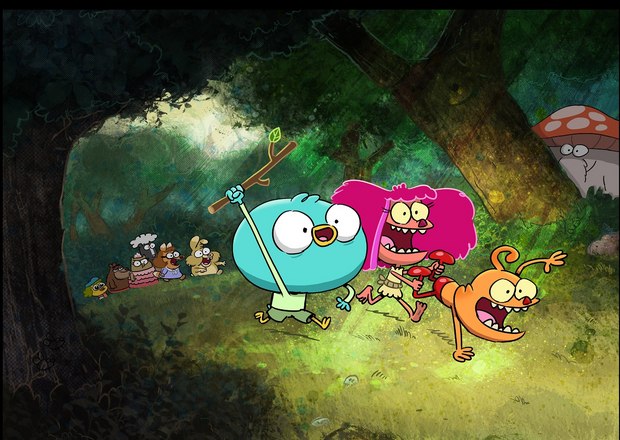 Burbank, CA -- A mild-mannered bird and his two wild best friends embark on a series of hilarious adventures in Nickelodeon’s brand-new animated series Harvey Beaks, debuting Sunday, March 29, at 7:00p.m. (ET/PT).  This 26-episode series, created and executive produced by C.H. Greenblatt (Chowder), tells the story of the unlikely friendship between Harvey, a kid who’s never broken the rules, and Fee and Foo, his two friends who’ve never lived by any. Viewers can catch a special first-look of the series, produced by Nickelodeon Animation Studios in Burbank, Calif., Saturday, March 28, at 9:30p.m. (ET/PT) immediately following the 2015 Kids’ Choice Awards. Harvey Beaks will roll out on Nickelodeon’s international channels beginning this summer.

Set in a magical forest, this new series follows one sweet bird on his mission to experience wild adventures with the help of his two best friends.  Harvey, Fee and Foo’s connection only grows stronger throughout the series as they push each other into endless fun.  In the special first-look “Pe-Choo!”, in order to have an awesome time at the lake, Harvey has to do the one thing that’s the hardest for him–get in really big trouble.

On Sunday, March 29, at 7:00p.m. (ET/PT), the series will launch in its regular timeslot with “The Spitting Tree.” Spitting from the highest tree in Littlebark is fun until the kids realize they can’t get back down.  An encore of “Pe-Choo!” will immediately follow.

“Carl Greenblatt’s very funny and heart-warming stories fit directly in with Nickelodeon’s DNA and sensibilities,” said Russell Hicks, President of Content Development and Production, Nickelodeon.  “In Harvey Beaks, viewers have the opportunity to discover the joys, triumphs and fears of growing up through thoughtful characters who push their limits and step out of their personal comfort zones.”

Viewers can visit the Harvey Beaks page on Nick.com and the Nick App to learn more about the show and its characters, get a behind-the-scenes look at the series and play new games beginning March 26, including “Harvey Beaks Pe-Choo!” and take the quiz "Which Character Are You?”.   Episodes of Harvey Beaks will be available on Nick.com and the Nick App, along with platforms including iTunes, Amazon, Xbox, Google Play, Vudu, Playstation, Hulu and VOD.