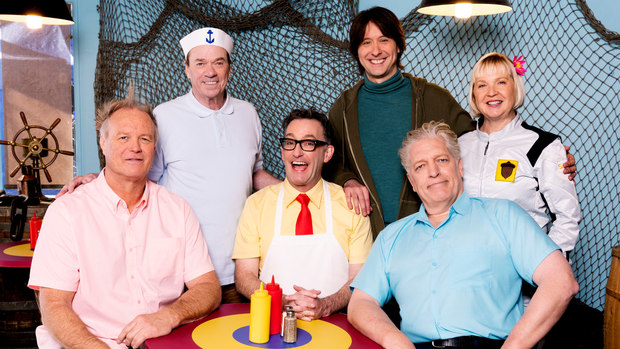 In the episode, Patrick and SpongeBob journey to the surface world, where the duo come across a few familiar faces during lunchtime rush at The Trusty Slab restaurant. Meanwhile the Bikini Bottom residents set up a surprise birthday party for SpongeBob.

Donning his famous lifeguard attire, Hasselhoff guests as himself in the special, where he runs into a little trouble in an ocean kayak and on the beach. Hasselhoff also notably played himself in The SpongeBob SquarePants Movie. His return is a special nod to his original performance for fans around the world.

“I experienced the world of SpongeBob first-hand when I appeared in The SpongeBob SquarePants Movie, which was an amazing experience,” Hasselhoff shared.  “After making that cameo, kids around the world recognized me from the movie.  How awesome to now come back to be part of the 20th anniversary special.  I got to interact with Tom Kenny and SpongeBob. It also was a heartwarming tribute to Steve Hillenburg.  Happy 20th SpongeBob.  Hooray!!”

Kenny added, “Steve Hillenburg gave me the gift of a lifetime when he asked me to voice his porous alter ego, SpongeBob SquarePants. He changed my life and all of our lives. To reach the 20-year mark is a huge milestone and we wanted to celebrate by throwing a big party Bikini Bottom style. SpongeBob only comes up to the surface world on special occasions and this time one stop on his journey is The Trusty Slab restaurant. Stepping on the set and acting alongside my friends and fellow cast members was a true out of body experience. Fans are truly going to love it.”

Additional guest stars in the special include Kel Mitchell (All That), Jack Griffo (The Thundermans) and Daniella Perkins (Knight Squad).

SpongeBob launched July 17, 1999, and has reigned as the number-one kids’ animated series on TV for the last 17 years, generating a universe of beloved characters, pop culture catchphrases and memes, theatrical releases, consumer products, a Tony award-winning Broadway musical and a global fan base. The “Best Year Ever,” leads up to the theatrical release of Paramount Pictures and Nickelodeon Movies’ The SpongeBob Movie: It's a Wonderful Sponge in Summer 2020.