Nickelodeon Pulls ‘Made by Maddie’ Over Reported ‘Hair Love’ Similarities

Move comes in response to controversy over claims that characters on Silvergate Media’s new animated kids’ series are strikingly like those in Matthew A. Cherry’s Oscar-winning short. 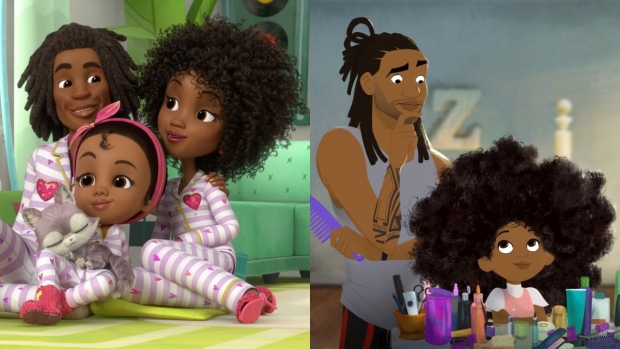 In response to social media pressure and controversy surrounding Nickelodeon’s announcement this week of the September 13 Nick Jr. premiere of a brand-new animated preschool series, Made by Maddie, the network has just announced they’ve removed the show from their upcoming schedule. The controversy stems from the purported likeness of characters on the show to characters in Matthew A. Cherry’s Oscar-winning animated short, Hair Love.

In an email just sent to AWN, Nickelodeon states, “Made by Maddie is a show we acquired several years ago from Silvergate Media, a renowned production company we have previously worked with on other series.  Since announcing the show’s premiere date this week, we have been listening closely to the commentary, criticism and concern coming from both viewers and members of the creative community.

In response, and out of respect to all voices in the conversation, we are removing the show from our schedule as we garner further insight into the creative journey of the show.  We are grateful to Silvergate Media for all of their work.  And we hold Matthew A. Cherry and the wonderful and inspiring Hair Love in the highest regard.” Made by Maddie follows Maddie (Alyssa Cheatham), a quick-thinking little girl with a big personality and a huge heart, who has a passion for fashion. Maddie finds design inspiration around every corner.  Her creative thinking and dazzling designs reflect the bustling, colorful city of New York and its residents. Maddie confidently embraces her own unique style, celebrates individuality, treats everyone with kindness, and encourages others to take risks and be themselves.

Yesterday, the L.A. Times reported that criticism erupted quite quickly in response to the show’s trailer and first look posting from this past Tuesday, noting that  social media users were quick to point out that the central character and her parents bear a striking resemblance to the main characters in Hair Love, Cherry’s hugely popular short about a Black father’s struggle to tame his young daughter’s hair.

Nickelodeon first announced Made by Maddie at their 2018 upfronts (then known as Fashion Ally); the show, created by industry veteran Paula Rosenthal, is the third Silvergate series Nickelodeon has picked up, after Sunny Day and Peter Rabbit. In asserting the show is completely of their own creation, Silvergate Media CEO Waheed Alli said in a statement, “Silvergate Media has been working on the series for the last five years, and throughout the production has taken steps to ensure a diverse production team and an appropriate voice cast lending their expertise and talent.” Hair Love began its improbable Oscar run with a $300,000 Kickstarter campaign back in 2017, the most money ever raised on the crowd-funding platform for a short film. Cherry enlisted many talented animation industry friends to help make the film in their spare time. In a January 2020 interview with AWN, Cherry noted, “Being my first foray into animation, I wanted to do something that hopefully would do the medium justice. We're really proud of the final film. We put a lot of time into developing the story and making sure that, hopefully, it connects with people. And we always joked that we got probably 90% of all the black people that work in animation to work on this. Between Peter [Ramsey], Bruce [Smith], Everett [Downing Jr.], Frank Abney and Karen Toliver, we definitely had a great mix of folks.”

Sony Pictures Animation picked up the film in March of 2019, quickly helping to finish the short so it could screen in theatres in front of Angry Birds 2.

Head on over to the L.A. Times for the full story behind the controversy.