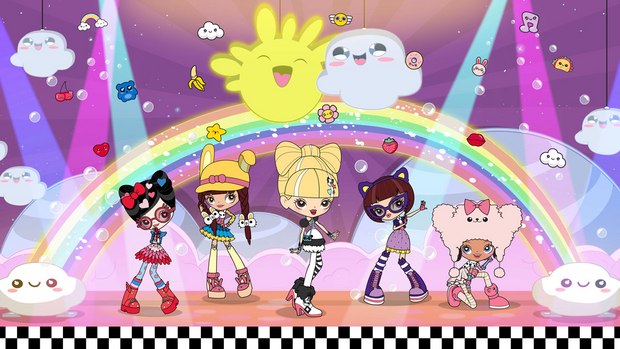 Kuu Kuu Harajuku, co-created and executive produced by superstar Gwen Stefani, will continue to follow the kuu kuu adventures of the band HJ5 -- Love, Angel, Music, Baby and G -- through their super-cute world of music, fashion and style. Facing higher stakes, HJ5 are no longer a band struggling to make the scene. HJ5 will discover that maintaining success is more difficult than finding success, while their manager, Rudie, continues to mess up important situations.

In the Kuu Kuu Harajuku premiere episode, “Training Day/Multi Tasking,” HJ5 is booked to perform a concert on the Trans Harajuku Express, but they are missing one important thing: tickets. They give the concert for the ages, playing and dancing in and on various modes of transportation, as they try to keep up with the speeding train. Then, Rudie accidentally double-books the band: Rather than cancel one of the gigs, G wants them to play both gigs at once. New episodes of Kuu Kuu Harajuku will continue to roll out every Friday at 7:30 p.m. (ET/PT).

Teletubbies continues as the four iconic characters forge meaningful bonds with their tiny friends, the Tiddlytubbies. The series introduces all-new elements, including the honk-honk Tubby Car and an area of Teletubbyland called the Hidey Hup, a beautiful hidden glade containing equipment for Teletubby fun. Full of exploration, Teletubbies inspires confidence and curiosity in preschoolers and with the goal of nurturing childhood development. Teletubbies is produced by DHX Media.

In the Teletubbies season two premiere, “Close the Gate/Trailer,” the Teletubbies accidentally leave the Tiddlytubbies’ gate open and search for missing Mi-Mi, RuRu and Baa. They discover an extra special trailer on the Tubby Custard Ride. Teletubbies will air regularly weekdays at 2 p.m. (ET/PT) through August on the Nick Jr. channel.