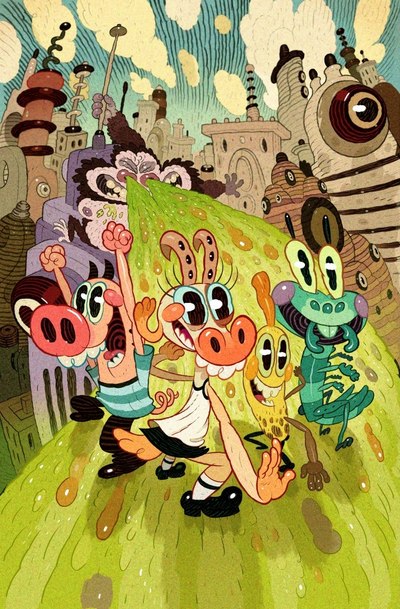 Produced by Nickelodeon Animation Studios in Burbank, CA, the 26-episode half-hour series of absurd interwoven stories follows the eponymous characters Pig (the fool), Goat (the artist), Banana (the wise-guy) and Cricket (the brain), as four friends and roommates who live in a fantastical city where just about anything comes to life. Viewers can watch a sneak peek of Pig Goat Banana Cricket Thursday, July 16, at 9:30p.m. (ET/PT) immediately following the 2015 Kids’ Choice Sports Awards. The series will air episodes in its regular timeslot Saturdays at 10:30a.m. (ET/PT) and will roll out on Nickelodeon’s international channels beginning early 2016.

“Pig Goat Banana Cricket is deeply rooted in Nickelodeon’s tradition of great character-driven storytelling by creators who are the ultimate purveyors of comedy,” said Russell Hicks, President of Content Development and Production, Nickelodeon. “Cooper and Ryan’s distinct aesthetic vision is rivaled by their comedic sensibility to tell wacky adventures that are definitely out of this world.”

“Our goal is to make the funniest show out there and to make you laugh out loud,” Cooper said.

“Everything is for the sake of comedy, andPig Goat Banana Cricket is an original cartoon with heart and friendship powered by wild imagination and energy,” added Ryan.

One of Cooper and Ryan’s earliest collaborations was creating a comic called “Cupcakes of Time” for Nickelodeon Magazine. Between the two, their resume includes various works and stories for Bloomberg Business, Owl Magazine, National Geographic for Kids, Marvel, MAD Magazine and more. Characteristic of their unique art style, the show features the lush charm of retro kids’ books and cutting edge illustration fused with sparkling characters and surprising industrial design. A startling mix of bubbly, loveable characters and rich, layered worlds burst with weird machines and lush, mysterious vegetation.

Pig Goat Banana Cricket is set in Boopelite City, a gigantic and whirring metropolis where many of the buildings look like archaic clockworks. The streets are constantly teeming with characters of intensely varied description, and the sidewalks are crammed with animals, robots, walking fruit, sea creatures, and more. The four roommates live in a treehouse, which sits in the middle of the city, surrounded by the forest, the seas and anywhere else the friends could possibly go.

In the special sneak preview “Pig Goat Banana Cricket High Five!” launching Thursday, July 16, at 9:30p.m. (ET/PT), Pig’s errand to go pickle shopping culminates in an unexpected friendship with a shopping cart and a mad pursuit across town by the merciless Shragger. All the while, Goat struggles to sing her catchy new song, and Banana’s job is on the line after he loses his entire troop…again. Meanwhile, Cricket’s beauty goo experiment beautifies the planet so well that a passing comet’s passionate kisses may just cause the end of the world.

On Saturday, July 18, at 10:30a.m. (ET/PT), the series will launch in its regular timeslot with “Fudge-pocalypse.” In the episode, Goat wishes for a bubble made out of fudge and between Cricket’s super genius inventing skills and Pig’s desire to “help,” the result is an out-of-control fudge-bubble making machine that engulfs the world in gooey fudge bubbles. Meanwhile, Banana gets kidnapped by pirates on the high fudgy seas. The four friends have to brave strange perils and rely on each other to survive the Fudge-pocalypse.