As the popular animated series Breadwinners  reaches the top spot in its Saturday 11:00 AM time slot with Kids 2-11/6-11 and Boys 2-11/6-11, Nickelodeon announces that it has ordered a second season. 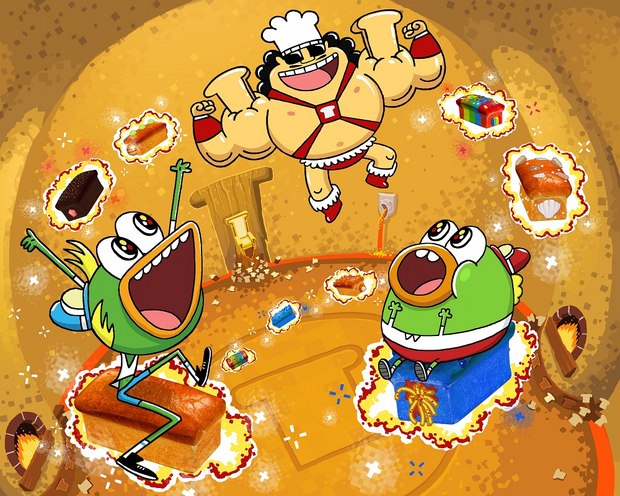 A second season is in the oven for Nickelodeon’s Breadwinners, a popular animated series that ranks #1 in its Saturday 11:00a.m. time slot with Kids 2-11/6-11 and Boys 2-11/6-11.  The announcement was made by Russell Hicks, President, Content Development and Production. The outrageous comedy series, filled with infectious music and boundless energy, follows two quazy ducks who never give up on delivering bread to hungry beaks everywhere in their jet-fueled rocket van. The series will make its season one debut on the network’s international channels this fall.

“The popularity and success of Breadwinners is a testament to our commitment to creator-driven animation,” Hicks said. “We’re thrilled to bring our audience another season of this great show as part of our continued pledge to building our pipeline of original animation.”

The 20-episode order continues with more of SwaySway and Buhdeuce’s wild and quazy adventures aided by their trusted allies: the Bread Maker, Ketta, T-Midi and Jelly.  As SwaySway and Buhdeuce delve deeper into the expansive world of Pondgea, they dodge more menacing monsters, discover new magical breads, and meet more riduckulous customers along the way.  No matter what, this duck duo will keep moving to the beat and getting bread up in yo beak!

Nickelodeon closed April as the top basic cable net in total day with Kids 2-11 (2.7/872K, up +4% versus a year ago) and total viewers (1.6M), securing its fourth straight monthly win driven by its hit animation and preschool roster.

Breadwinners is created by Steve Borst (Teen Titans Go!, MAD) and Gary “Doodles” Di Raffaele (MAD, Metalocalypse), who was discovered from Nick’s 2012 Animated Shorts Program. This team of emerging and innovative artists delivers a funny and original series for this new generation of kids. With vast inspirations from classic buddy-comedy animation, and various current gaming, internet and music cultures, this innovative show introduces the next duck duo who always keep their beaks up and their heads boppin’.