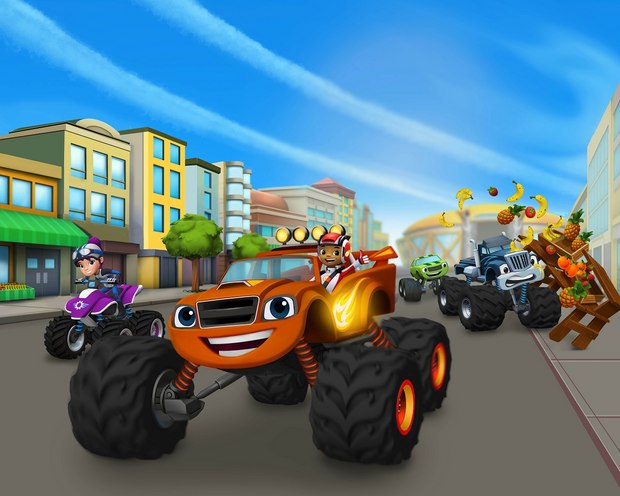 New York, NY -- Building upon its legacy of providing curriculum-enriched preschool programming, Nickelodeon will introduce viewers to the exciting world of Science, Technology, Engineering and Math (STEM) with the hour-long premiere of the brand-new, interactive animated series, Blaze and the Monster Machines, on Monday, Oct. 13, at 12:00 p.m. (ET/PT).  The first preschool show on TV to comprehensively cover all areas of STEM in every episode, Blaze and the Monster Machines follows the amazing monster truck Blaze and his eight-year-old driver AJ.

Together, Blaze and AJ have adventures that explore the physics of how things move; tackle problems through scientific inquiry and mathematics; and discover the parts needed to make everyday technologies work.   Each action-packed episode is filled with monster trucks, physical humor and upbeat original songs with lyrics that highlight a STEM concept such as adhesion, friction, force, trajectory and magnetism.  The series is created by Jeff Borkin (Team Umizoomi head writer) and Ellen Martin (Bubble Guppies supervising producer).

“Blaze and the Monster Machines is unlike any other preschool show on TV because of its rich interactive curriculum focused entirely on STEM,” says Teri Weiss, EVP of Production and Development, Nickelodeon Preschool.  “Blaze gets children excited about STEM by encouraging their curiosity about how things work, which will help them get ready for school and their future in today’s high-tech world.”

In the hour-long series premiere, “Blaze of Glory,” Blaze and AJ are introduced to a world of racing monster machines in the town of Axle City.  When Crusher, a troublemaker truck, uses his dirty tricks to try to win the championship race, Blaze does everything he can to help his friends and beat him to the finish line.  Throughout the adventure, preschoolers will be introduced to STEM concepts including buoyancy and trajectory.  The series launch will be followed by three weeks of premieres in its regular timeslot at 12:30 p.m. (ET/PT) on Nickelodeon.

Nickelodeon’s award-winning website, www.nickjr.com, will feature a Blaze and the Monster Machines site where kids and parents can watch music videos, download coloring pages, activity packs, posters and trading cards.  The series premiere episode will be available on the site beginning Oct. 14 and the brand-new game, Blaze to the Rescue, will launch on Oct. 16.

Blaze and the Monster Machines will roll out on Nickelodeon channels internationally in early 2015.