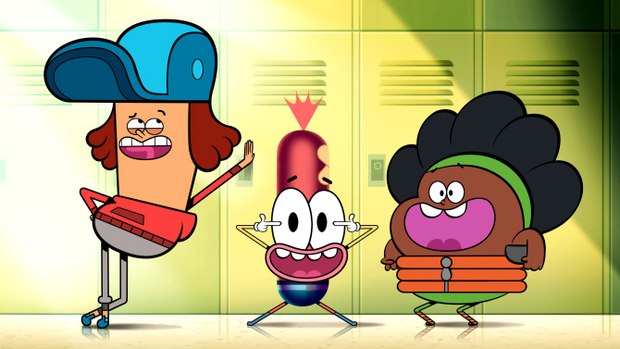 BURBANK, CA -- Nickelodeon announced that it has greenlit 20 episodes of the social-media influenced comedy Pinky Malinky, the next original animated series to join the growing roster of content driven by creators discovered all over the world. Co-created and co-executive produced by Chris Garbutt and Rikke Asbjoern (The Amazing World of Gumball) and executive produced by Scott Kreamer (Kung Fu Panda: Legends of Awesomeness), the trio are a part of the Artist Collective, an internal diverse group of experienced creators who mentor and support up-and-coming talent while also collaborating to cultivate, challenge and inspire Nickelodeon’s development pipeline.

Pinky Malinky follows the everyday life of Pinky Malinky, an infectiously positive hotdog living in a human world who, along with his two best friends, navigate school and life with a unique perspective. Their humorous experiences will also be shared across social media and Nickelodeon’s digital platforms. Produced by Nickelodeon Animation Studios in Burbank, CA, the series is scheduled to premiere in 2016.

“Pinky Malinky will offer original short form videos and content that will be produced in conjunction with the series for various social media platforms,” said Russell Hicks, President, Content Development and Production, Nickelodeon. “In this fast-paced digital age, the online extensions in this brand-new series are another example of how Nickelodeon meets the needs of our kids who want to access content anytime and everywhere.”

Garbutt and Asbjoern added, “We’re really happy that Pinky has found a home at Nickelodeon. We’ve been living with him ourselves for quite a while now, so we’re very excited to finally get a chance to share the little fella with the rest of the world!”

Using the tropes of a mockumentary and reality show format, Pinky and his friends will talk directly to the camera and the audience to share their absurd and silly take on real life. At times, all children feel like they don't fit in and Pinky’s undeniably unique point of view as a literal wiener amongst humans will allow kids to laugh at his familiar struggles and enjoy his unusual perspective on the challenges of being a school-aged kid. By always reaching for the stars, Pinky pushes himself further than anyone could imagine, and proves that being a “wiener” is only one letter away from being a “WINNER!”

Here’s a first look at the series, courtesy of The Hollywood Reporter: