Nickelodeon greenlights a third season of its hit animated series ‘Sanjay and Craig’ with a 20-episode order. 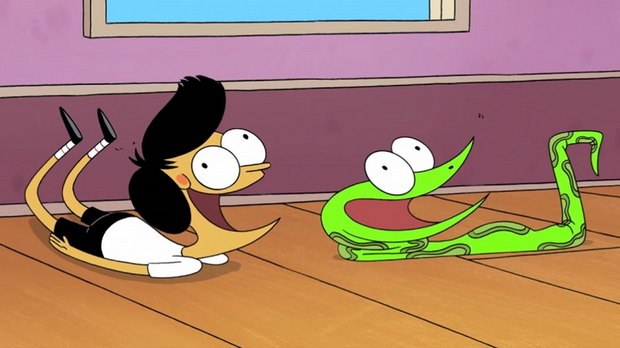 Burbank, CA -- Nickelodeon has greenlit a third season of its hit animated series Sanjay and Craig  with a 20-episode order. The original series follows the misadventures of Sanjay, an excitable and irreverent 12-year-old boy and his best friend Craig, a smooth-talking snake and master of disguise. New episodes from season two will debut this summer on Nickelodeon, with season two set to roll out internationally this fall.

Year to date, new episode premieres of Sanjay and Craig average a 4.9/1.6M with Kids 2-11 and 3 million total viewers. It is also the #2 animated show across all TV with Kids 2-11, behind SpongeBob SquarePants.  The series premiered on Nickelodeon’s international channel in September 2013, and is seen in more than 120 countries and territories around the world via the Nickelodeon channels and syndication.  The show ranked as a top 5 program among Kids 4-14 in its time slot vs. other kids’ channels in key international markets including Australia, Brazil, Germany, Spain, Poland, Hungary and South Africa. In CQ1’14, Sanjay and Craig reached more than  18 million viewers across 11 countries including Australia, Brazil, Germany, Spain, Hungary, Italy, Mexico, Netherlands, Poland, United Kingdom and South Africa.

“When Sanjay and Craig was first brought to us and was described as being about two best friends, with one that just happens to be a snake, we knew that it had the makings of a great Nickelodeon cartoon,” said Russell Hicks, President, Content Development and Production, Nickelodeon, in making the announcement. “This show is connecting with kids because our creators had a great vision and they are telling stories that our audience relates to and that are just flat out funny with a lot of heart.”

The third season will continue to draw from real kid experiences as inspiration for Sanjay and Craig’s many crazy adventures. The series will build upon the growing collection of cool and eclectic music, while featuring more half-hour specials, including a holiday episode, filled with weird and funny epic journeys that Sanjay, Craig, and best friends Hector and Megan pursue.

Sanjay and Craig was created by Jim Dirschberger, Jay Howell and Andreas Trolf. The second season is co-executive produced by Dirschberger and Howell, with Chris Viscardi and Will McRobb as executive producers. The series features the voice talents of Maulik Pancholy and Chris Hardwick in the lead roles as Sanjay and Craig, respectively, with additional cast members that include: Linda Cardellini (Freaks and Geeks) as Megan; Matt Jones (Breaking Bad) as Hector; Tony Hale (Veep, Arrested Development) as Mr. Noodman; Grey Griffin (The Fairly OddParents) as Darlene and Sandy Dickson; and Remington Tufflips as himself.

Tags
Nickelodeon
Sanjay and Craig
More From News:
Next Post
DreamWorks Animation Heads 'Home' with First TrailerPrevious Post
SIGGRAPH 2014 to Host Panel & Screening of ‘How to Train Your Dragon 2’