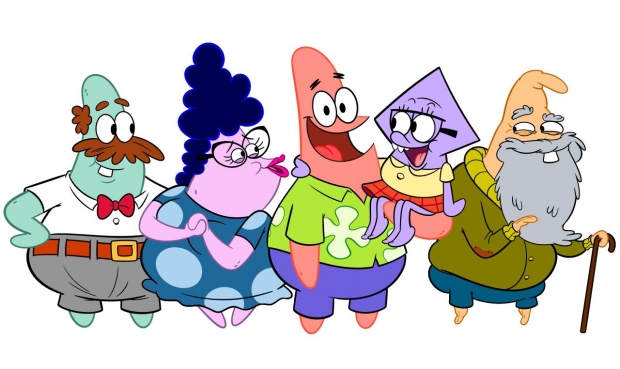 Nickelodeon has just dropped a fun “sneak peek” of their all-new original animated series, The Patrick Star Show, the second spinoff of the hugely successful SpongeBob SquarePants TV series. Produced by Nickelodeon Animation Studio, The Patrick Star Show is a 2D family sitcom starring Patrick and the rest of his family as they are constantly disrupted by the famed starfish’s wild whims and surreal imagination. The 13-episode series debuts this July on Nickelodeon. The first series spinoff, Kamp Koral: SpongeBob’s Under Years, premiered earlier this year on Paramount+.

The Patrick Star Show follows a younger Patrick Star living at home with his family, where he hosts his own variety show for the neighborhood from his television-turned-bedroom. His little sister, Squidina, works behind the scenes to make sure Patrick’s show is always running smoothly, while his parents, Bunny and Cecil and his grandpa, GrandPat, each support Patrick in their own hilariously absurd ways. The Star family’s unpredictable adventures often inform, integrate, and sometimes even interfere with Patrick’s TV show, but one thing is for sure: his bizarre life always makes for great television!

Take a quick look at what’s in store come July!

Since its launch July 17, 1999, SpongeBob SquarePants has reigned as the number-one animated series on TV for the last 18 years, while generating a universe of popular characters, pop culture catchphrases and memes, theatrical releases, consumer products, a Tony Award-winning Broadway musical, and a global fan base.  SpongeBob SquarePants is the most widely distributed property in ViacomCBS Networks International history, seen in more than 170 countries and territories, translated in 30+ languages, and averaging more than 100 million total viewers every month. SpongeBob SquarePants was created by the late Stephen Hillenburg and produced by Nickelodeon in Burbank.